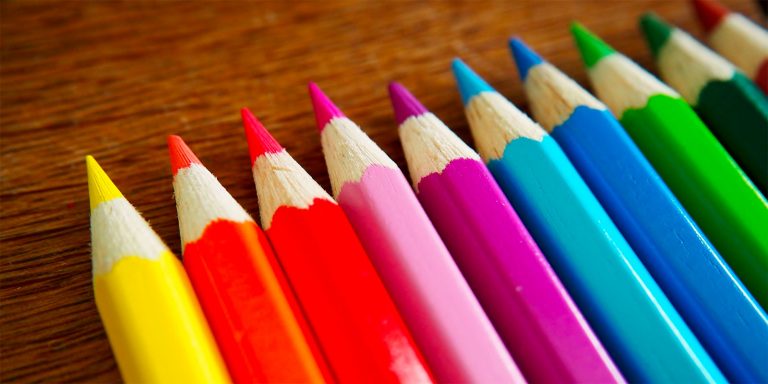 Kids accidentally misspell the darnedest things. (With my speculation on whether each was faked.)

I always enjoy when I stumble onto pictures of kids’ funny test answers or notes, producing outstanding results via spelling mistakes, ridiculousness or bluntness. But I’ve generally held off on bringing them over to this site, because often, the results seem *too* outstanding. Like, as much as I want to believe a kid inadvertently produced the hilarity, I also suspect it was done by an adult looking for… something. Feeling cool on the Internet? Not sure.

So today, I’ve got 11 kids’ spelling mistakes and other schoolwork drawings and answers that produced unintentionally inappropriate results — but with a hedge. I’m also going to speculate on the authenticity of each of these images. It’s like Antiques Roadshow meets Kids Say the Darndest Things. (Why hasn’t anyone ever pitched that show?) 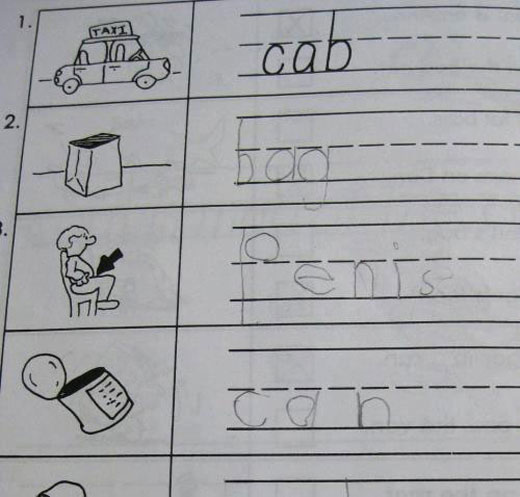 Chance this was faked by an adult? 20 percent. I can see virtually any first grade boy writing “penis” in this scenario, because that REALLY is where the arrow is pointing. Frankly it’s a more accurate answer than the ostensible correct answer, “lap.” 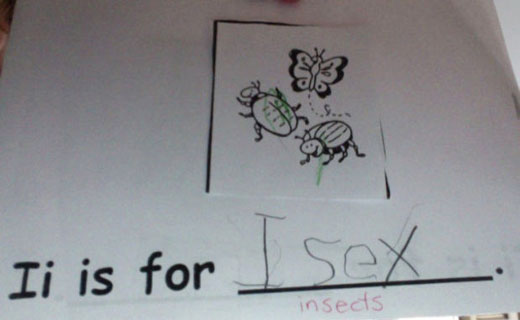 Chance this was faked by an adult? 49 percent. The handwriting looks like an adult writing left-handed (if they’re right-handed; I’m not saying all lefties have inherently terrible handwriting) (although if the shoe fits…). And the red pen underneath was obviously added for the sake of clarification to the Internet masses. But I’m leaning ever so slightly toward it being legit, because I don’t know that the joke is one an adult would make. Wouldn’t an adult looking for Internet points go with “incest” here instead? 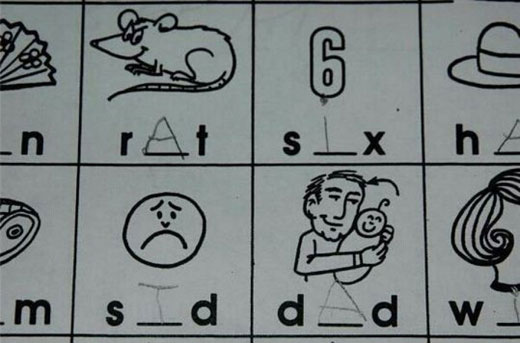 Chance this was faked by an adult? 55 percent. Obviously this “kid” knows how to make the letter “A” (it appears handwritten three times), and I’m not even sure why a “T” would possibly be relevant to a kid. And since an STD would yield a frowny face, everything here feels like more of an adult joke. 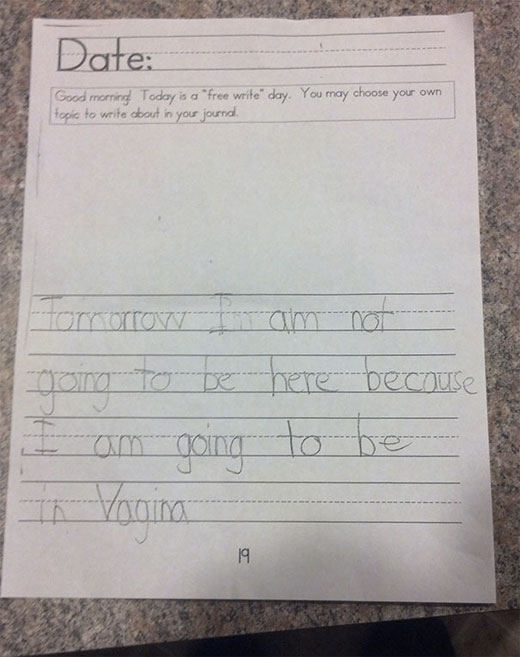 Chance this was faked by an adult? 30 percent. The handwriting is solid, while an adult faking it would intentionally be sloppier — and would make other strategic misspellings along the way. The misspelling isn’t necessarily improbable for a kid. I’m a bit suspicious by the missing date though. The precocious kid who possesses handwriting of this quality wouldn’t forget to put the date, while an adult crafting a forgery might consider that element of the ruse superfluous. 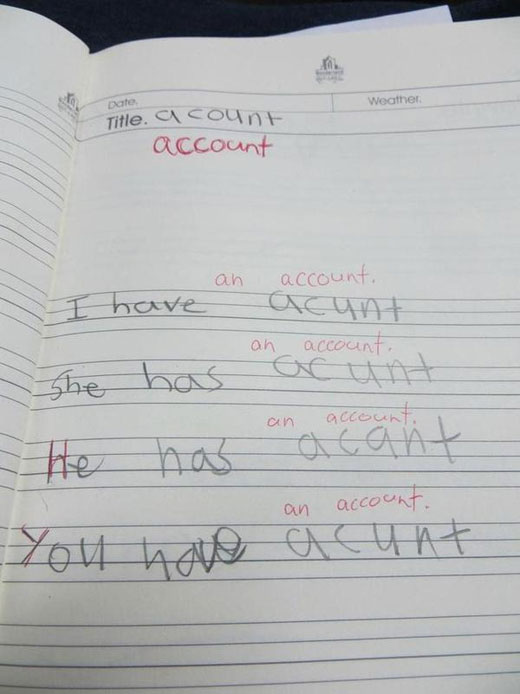 Chance this was faked by an adult? 33 percent. “Account” is an odd word for the teacher to pick for this assignment, which points toward fake. But the lower case “he” and “you” being corrected to capital letters gives a stronger argument for authenticity; an adult faking an assignment like this probably wouldn’t include that type of detail. 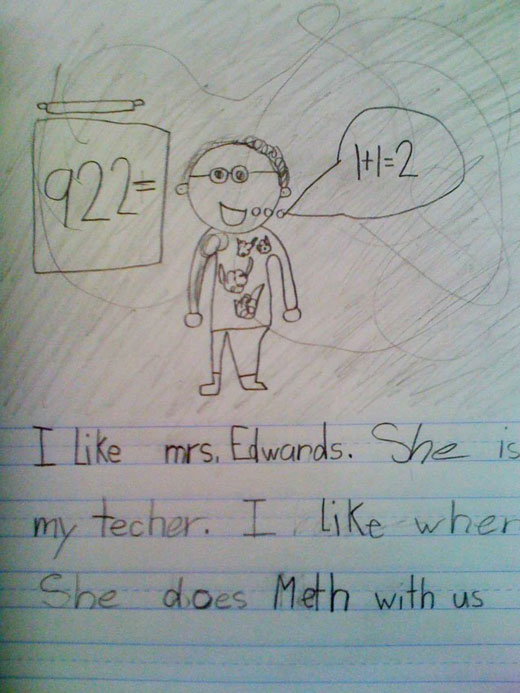 Chance this was faked by an adult? 75 percent. All of the elements feel manufactured to me. The drawing with a cat sweater. The random-but-not-random haphazard capitalization of letters. Misspelling “teacher” as “techer” to subtly establish the misspelling precedent. And the darker writing on “Meth” on top of something that was erased to draw the most attention to it. All very suspect. 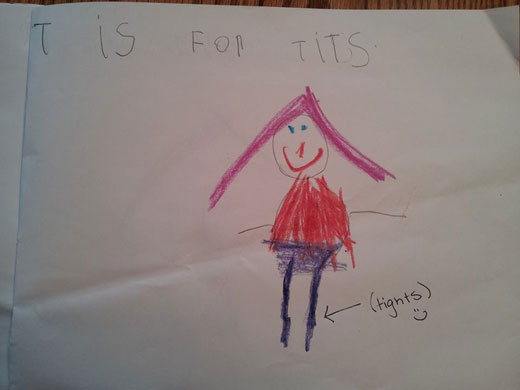 Chance this was faked by an adult? 10 percent. Everything adds up to this one being authentic. The teacher writing in black pen, not red, is key; an adult faking would use the traditional red. Also, “tits” is a logical child-type misspelling of “tights.” And, most of all, an adult faking this certainly would’ve given the character a noticeable bosom to really drive home the bit. This kid didn’t. 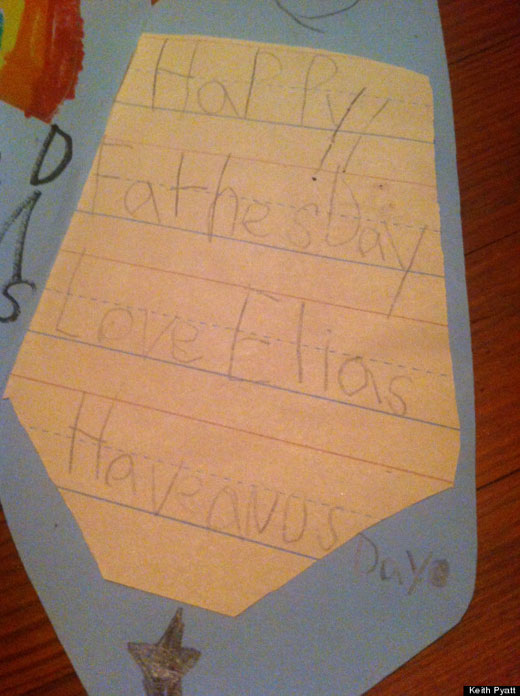 Chance this was faked by an adult? 60 percent. The handwriting really does look like a kid, not an adult pretending to be a kid. “Anus” is a fairly believable misspelling of “a nice.” And an adult faking would probably have written everything darker so it would look better on the Internet. 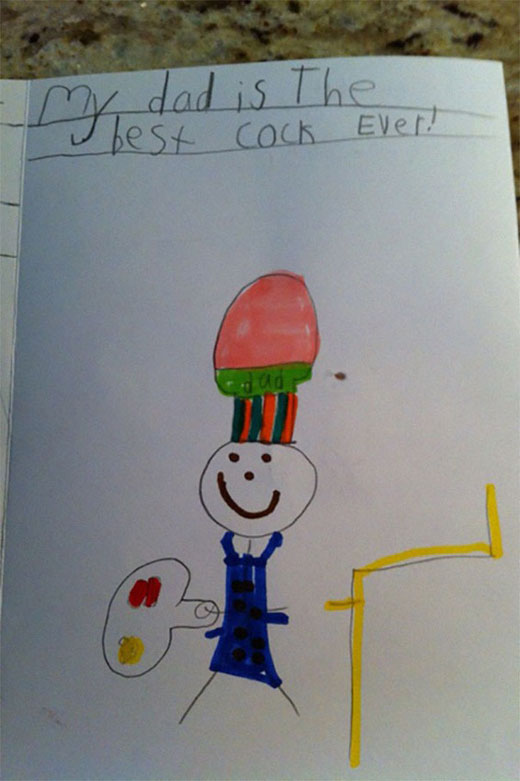 Chance this was faked by an adult? 85 percent. This adult went to the well one too many times. I’d believe “cook” becoming “cock” or a pink-colored, mushroom-shaped chef hat in a vacuum. Both of them together? Far too nefarious. 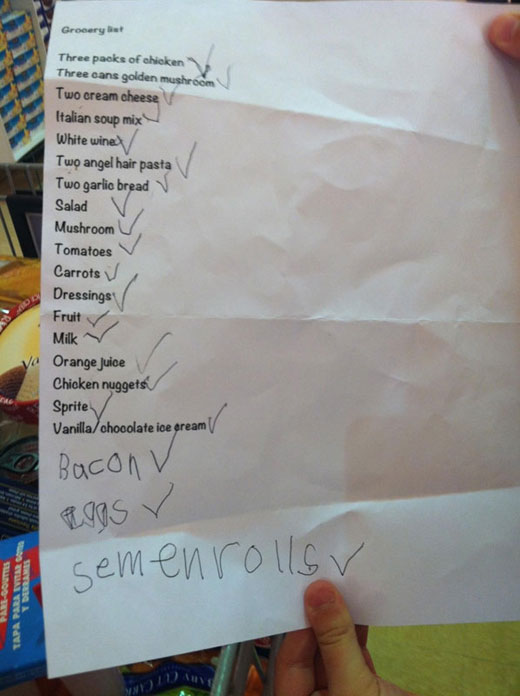 Chance this was faked by an adult? 45 percent. The “cinnamon”/”semen” swap is shockingly feasible for a kid. But the handwriting is a little too “little kid sloppy” for me to totally buy in. Still, I’m leaning toward it being authentic because this photo was clearly taken at a grocery store — and a person faking it most likely wouldn’t bother with adding that level of background detail. 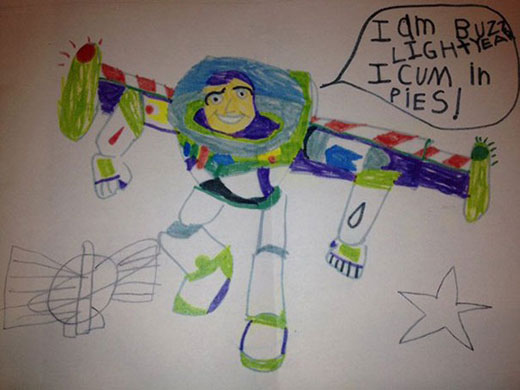