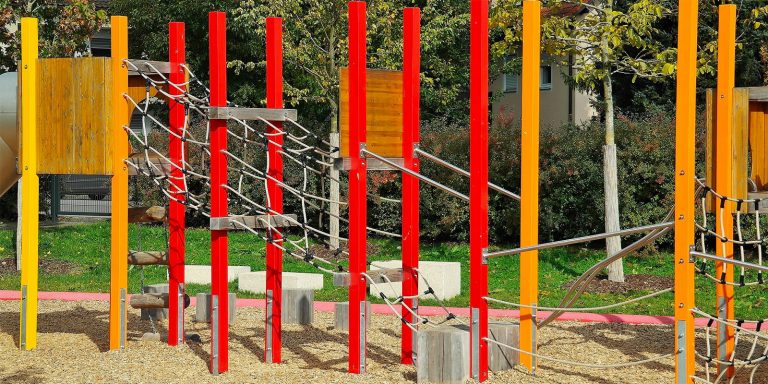 From Duck Duck Goose to snowball fights to tetherball, here are the games kids no longer play.

Recently, for a friend’s birthday, we went to one of those places where you play dodgeball or basketball on tons of trampolines. Long story short, my thirty-something friends and I ended up in a long trampoline dodgeball battle against a group of pimply-faced teens. And we won every game. Which was a weird mix of very sad and oddly triumphant.

Afterward, as we stretched and iced our aching joints while the teens ran around eating pizza, we realized our advantage — dodgeball experience. We all played dodgeball growing up, both on the playground and in gym class. Today’s kids never experienced it. Dodgeball has been almost exclusively banned for an entire generation.

I promise, that story was NOT just a subtle way to brag about whooping some youths in dodgeball. That day inspired me to put together this list of children’s playground games that are now considered too violent or too un-politically correct for kids to play today. I found evidence on the Internet (pardon that paradox) of bans on all 11 of these…

This game doesn’t fly anymore because of all the pushing and shoving. But also, in the modern litigious society, it’s entirely possible schools banned it because they couldn’t clear the music rights.

This wasn’t a casual game kids played when I was growing up — it was a school-sanctioned game. Like, we played this in gym class. We ended up with zero broken arms out of it, when, in retrospect, it should’ve averaged one broken arm per game. I have to think we were some of the last kids to play this one… quite possibly for the better.

Dodgeball is the ultimate banned game — institutionalized bullying, the strong ganging up against the weak, personalized humiliation, kids making Ben Stiller references. None of those things is good for today’s kids.

The punching is enough to get tetherball on a watch list; the potential for a kid to accidentally get choked by a rope then concussed by a flying ball is enough to end tetherball’s dreams of ever making a trendy comeback.

There’s a long standing tradition of kids punching each other for violating a jinx. The punching method is far preferable to the “you owe me a Coke” method of punishment, seeing as (1) no one ever actually purchases said Coke and (2) kids games are no place for product placement. It’s just one step away from Taco Bell-sponsored math class.

In King of the Hill, one kid stands on top of any sort of elevated option — an actual hill, a pitcher’s mound, etc. — and other kids try to fight him off to temporarily stand on top. I think games where nonstop brawling is more the goal than the means to an actual goal had to go. I didn’t watch all 300 episodes of the show King of the Hill, but fittingly, it seems like the plot of one of the 297 episodes about Hank trying to get Bobby to be more manly could’ve fittingly involved this game.

I’m thoroughly mortified that as a child, I regularly participated in a recess game called Smear the Queer. The game consisted of one kid having a football, everyone chasing him and tackling him, then someone else taking the football, everyone chasing him and tackling him, and repeat. We had no idea the game we were playing contained a slur in the title — none of us knew that slur — and none of the recess monitors or teachers who saw us playing the game ever pointed it out. Blissful ignorance for us, I suppose. Today’s kids can’t use the word queer (which is a good thing, obviously) or tackle each other so this one is gone, quite certainly for the best.

Hurling weapons — even soft, fluffy weapons — is now taboo. Even if your helicopter mom put you in six coats, two gloves, three hats, a scarf, 12 pairs of socks and boots so you can’t even feel a snowball — or possibly a boulder — hit you.

In Crack the Whip, kids hold hands and form a long chain. The kid in front runs around trying to get the kids on the back of the chain to “whip” off and fall. There’s no real objective or winner, just a lot of falling down. I don’t think kids would even want to play it today (it’s a more goal-oriented Pokemon generation); even if they did, you can’t talk about whipping kids so it would have to be an underground type of deal.

The violence in this game is mild: Touching one kid on the head and a tag. There has still been a movement to ban it because even that much violence is too much violence. And also possibly because one of today’s chubby children running around as the “goose” subtly programs kids to want foie gras.

11 Kissing Games, Ranked From Most to Least Innocent

11 Things You Miss Most About Being a Kid (Video)