11 Pieces of Evidence Shakespeare Was Gay 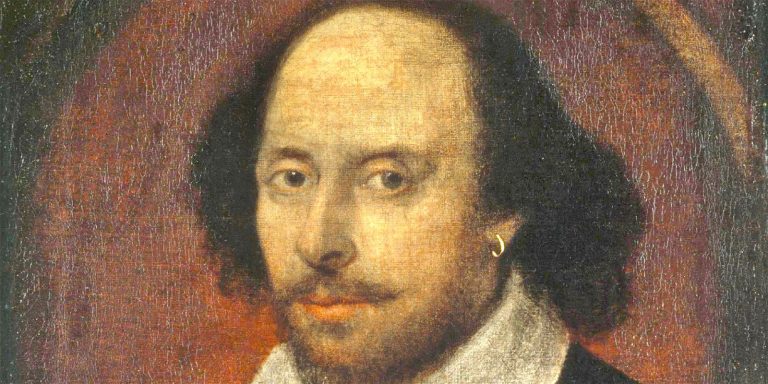 There’s a long-standing debate over Shakespeare’s sexuality. I do a deep dive.

If there’s one thing that everyone in the world has in common, it’s an unfortunate and often shamefully hidden love of trying to figure out whether or not famous people are gay. Google any famous name plus the word gay and you’ll find that someone’s beaten you to the speculative punch.

William Shakespeare gets a particular amount of attention in the gay/straight arena. People have been dissecting Shakespeare’s work and life for decades trying to figure out if he secretly had a thing for the fellas. And the resounding answer is… maybe.

I ended up wandering deep into this rabbit hole (no immature pun intended) and dug up these 11 pieces of evidence that are presented in “oh yeah, Shakespeare was gay” debate.

In 1609, a collection of 154 Shakespearean sonnets were published, arguably without his approval. The first 126 of the 154 are widely accepted as love poems to a man. Sonnet 20 is the most-cited example and, depending on how you look at it, could even make Walt Whitman say, “Damn, son, pump the brakes…”

A woman’s face with nature’s own hand painted,
Hast thou, the master mistress of my passion;
A woman’s gentle heart, but not acquainted
With shifting change, as is false women’s fashion:
An eye more bright than theirs, less false in rolling,
Gilding the object whereupon it gazeth;
A man in hue all hues in his controlling,
Which steals men’s eyes and women’s souls amazeth.
And for a woman wert thou first created;
Till Nature, as she wrought thee, fell a-doting,
And by addition me of thee defeated,
By adding one thing to my purpose nothing.
But since she prick’d thee out for women’s pleasure,
Mine be thy love and thy love’s use their treasure.

The whole “master mistress of my passion” thing draws a lot of attention… but the last two lines, which basically say, “You’ve got a nice penis that women really like, so go stick it to them but save the emotional love for me,” put Sonnet 20 over the edge.

It’s so blatant that the people in the “Shakespeare wasn’t gay” camp really only argue that this poem isn’t necessarily written by Shakespeare as Shakespeare… but, rather, could be him writing as a character.

2 | SO many cross-dressing plays

Shakespeare’s plays feature more cross-dressing than a Wayans Brothers movie. (And if you’re doing Othello at a homogeneous high school, perhaps more cross-racial make-up application, too.) About one out of every five Shakespearean plays involves cross-dressing and in three of them, it’s absolutely central to the plot.

Still, that’s a whole lotta gender blurring going on. Imagine if a prominent filmmaker today focused 20 percent of his films on cross-dressing. No one would even have the energy to speculate on Ryan Seacrest and Anderson Cooper anymore.

Shakespeare focuses a lot on deep male friendship. And that’s good. Guys are always fun to hang out with; like when Marge said to Homer, “He prefers the company of men,” and Homer replied, “Who doesn’t?”

But… there is one scene in Henry V where the Earl of Suffolk and Duke of York die in each other’s arms. Oh shit. Should I have put “SPOILER ALERT”? Anyway, many have suggested that it crosses the line from “great friends” to ” forbidden lovers”…

So did he [York] turn and over Suffolk’s neck
He threw his wounded arm and kiss’d his lips;
And so espoused to death, with blood he seal’d
A testament of noble-ending love.

Now, again, merely writing about two men kissing as they die to express their lifelong love doesn’t mean the person writing is gay. Every week I write a list NFL picks — that doesn’t make me a football player, a Greek or Professor Pigskin.

4 | His wife gets shafted in his will

Yes, Shakespeare was married. To a woman. Of course, we all know that’s not necessarily a sign of heterosexuality, more of just coloring inside the lines of societal expectations.

His wife’s name was Anne Hathaway. She, of course, would go on to star as Jake Gyllenhaal’s wife in… Brokeback Mountain. Now THAT’S some damning evidence.

All hilarity aside, Shakespeare’s wife really was named Anne Hathaway. A different Anne Hathaway than the one now, obviously. And there’s speculation that he wasn’t all that into her — while they had children, they also had a shotgun wedding (she gave birth six months after they were married)… and, after three years together, he went off to live on his own. Even more revealing is that when he died, the only thing he left her in his will was, quote, “the second best bed.”

Doesn’t seem like much, especially since, unlike most writers, Shakespeare actually owned land. (The “best bed” at the time was usually the one people had for guests, so the “second best bed” was the marital bed. But still, at least throw in something else for your wife.)

Shakespeare’s sonnets are all dedicated to a mysterious “Mr. W.H.” Assuming it’s not David Cross or Charlize Theron. (Or, more literally, Woody Harrelson.)

Most speculation suggests it was either Henry Wriothesley, the third Earl of Southampton, or William Herbert, the third Earl of Pembroke. Clearly someone thinks Shakespeare had a third Earl fetish. Seems a little like an NFL groupie who has a fetish for punters or special teamers who just got called up from the practice squad, but whatever.

6 | Hamlet acrostic spells “I am a homosexual”

This is definitely the weakest argument. There’s an urban legend that, in the very first published copy of Hamlet, the first letters of the final 14 lines spelled out “I am a homosexual.”

Of course, no one can really produce evidence of this. I went and actually looked at the last 14 lines of Hamlet and tried to recreate this urban legend. It’s not really possible. I had to use unorthodox line breaks, blend Horatio’s final speech with Prince Fortinbras’s, include the final stage direction, and divide the word “exeunt” over three lines…

I shall have also cause to speak,
And from his mouth whose voice will draw on
more; But let this same be presently perform’d,Even while men’s minds
are wild; lest more mischance On plots and errors,
happen. Let four captains Bear Hamlet, like a soldier, to the stage;     For he was likely, had he been put
on, To have proved
most royally: and, for his passage, The soldiers’ music and the rites
of war Speak loudly for him. Take up the bodies:
such a sight as this Becomes the field, but here shows much amiss. Go, bid the soldiers shoot. A dead march.
E
xe
unt, bearing off the dead bodies;
after which a pea
l of ordnance is shot off.

VERY dubious. This is like listening to Beatles songs for hidden backwards messages. Or searching for the word “sex” in the clouds in Disney movies.

Sonnet 126 begins “O thou, my lovely boy.” And while I’m not sure if Shakespeare envisioned himself the Day Man or Night Man — or if the lovely boy is a metaphor — this poem (the 126th of the 126 man-directed sonnets) is one of the only ones that just comes right out and declares its man slant.

Most of the pictures we see of Shakespeare have him looking kind of bald and squirrely and oddly pointy. Last year a new portrait surfaced where he was looking much handsomer.

The chairman of the Shakespeare Birthplace Trust even called it a “pinup.” In this portrait Shakespeare looks rosy-cheeked, he’s got a handsome beard (metaphor????????), and a head of styled hair. He’s also wearing an elaborate lacy collar and a gold-trimmed suit.

The Trust also said that the portrait might, quote, “give fresh momentum to generations of speculation as to whether the playwright was bisexual”… since it seems that the portrait must’ve been commissioned by someone wealthy. Like, say, a third Earl.

When Shakespeare’s works were performed, first off, he acted in a lot of them. And second off, the casts were all male. This wasn’t necessarily by choice, of course — at the time, women weren’t allowed to be actors. (As opposed to now, when a certain leading lady in the Twilight movies just chooses not to actually act.)

Shakespeare’s Sonnet 18 is arguably his most famous love poem, and begins with a very famous couplet…

Shall I compare thee to a summer’s day?
Thou art more lovely and more temperate.

Well… as the 18th sonnet, it’s part of the 126 sonnets directed at a man. The summer’s day is a man. (Obviously. The summer’s eve would’ve been a woman. Muted and ashamed hi-yo.)

Later on in the sonnet, there’s some wordplay that might or might not further suggest the man is a summer’s day…

Sometime too hot the eye of heaven shines,
And often is his gold complexion dimm’d;

Is the “his” a reference to summer? Yes. Could the “his” also be Shakespeare playing with pronouns to send a shout-out to his special guy? Absolutely. Do we have to meet him more than halfway to reach that conclusion? Probably.

For all the Shakespeare-gay speculation, there’s only one time where Shakespeare directly discusses homosexuality in his works. It’s in Troilus and Cressida, and it’s a discussion of Achilles… who has a tendoncy (yep) to swing toward the gents…

THERSITES
Prithee, be silent, boy; I profit not by thy talk: thou art thought to be Achilles’ male varlet.

THERSITES
Why, his masculine whore. Now, the rotten diseases of the south, the guts-griping, ruptures, catarrhs, loads o’ gravel i’ the back, lethargies, cold palsies, raw eyes, dirt-rotten livers, wheezing lungs, bladders full of imposthume, sciaticas, limekilns i’ the palm, incurable bone-ache, and the rivelled fee-simple of the tetter, take and take again such preposterous discoveries!

Two things here. One, if today’s right-wing politicians have taught us anything, it’s that the people who condemn homosexuality the loudest are the ones who are, by far, the most likely to get caught with a man in an airport, truck stop or public park bathroom.

And two, while such a venomous anti-gay speech could seem to shut the door on this entire “was he/wasn’t he?” argument — this speech actually fits in with the mores of the era. Even if Shakespeare was gay, the societal attitude toward homosexuality lined up with the rant above. Even though Troilus and Cressida is set during the Trojan War, the speech there reflects the Elizabethan attitudes toward homosexuality.

A lot of the speculation about Shakespeare’s sexuality is because he would’ve had to be coy and ambiguous about it in his writing — “coming out” wasn’t an option.

To wrap up, there’s, clearly, no definitive evidence that Shakespeare was gay. It’s all speculative and ambiguous. Unless someone uncovers some new piece of evidence, the debate will quietly, eternally push on.

I don’t find any of the stuff presented above to be a good enough piece of evidence to lead me to a verdict. Like so many other things, it’s a circular, unresolvable argument that’s more entertaining to debate than actually solve.

To paraphrase and bastardize the end of Sonnet 18, so long as men can breathe or eyes can see, so long will this debate live on and give life to longtail traffic for this blog post.

11 U.S. Presidents Who Might’ve Been Gay