I owned Nintendo’s biggest failure, the Virtual Boy. And it’s not that bad.

I was recently accosted on the street by a youth-oriented Nintendo street team promoting the new Nintendo 3DS. For those unfamiliar, the 3DS is Nintendo’s latest handheld video game system which features glasses-free 3-D.

I played with the demo unit the scruffy, youth-oriented street team member handed me for a minute and messed around with the 3-D. And it’s pretty impressive. But all I could think about was my old Virtual Boy. 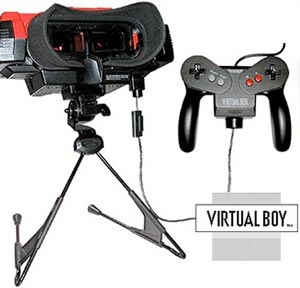 Back in 1995, Nintendo took its first stab at 3D when it unveiled the Virtual Boy. It was expensive and bulky, featured monochrome red graphics… and flopped miserably. I bought one on super clearance for $25 a little over a year later and it still sits in my childhood bedroom at my parents’ house today. (And I’m currently visiting my parents, thus being able to write this list while playing VB.)

The Virtual Boy gets ragged on a lot — and Nintendo itself would love to just erase it from history being their biggest flop ever — and I don’t think that’s entirely fair. Yes, it bombed — but if you really give it a chance, it can be wonderful. So here are my 11 points in defense of Nintendo’s Virtual Boy.

(And yes, I know I included it in my list of 11 of the Biggest Abuses of 3D Ever. But that’s just because the 3-D potential was never even close to realized. And also because I like to take strong stands then completely waffle on them.) 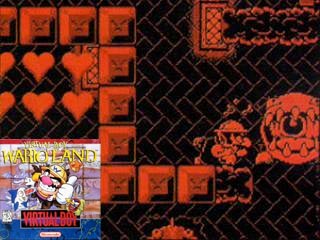 There’s no true Mario adventure for the VB but there is a Wario one — and it’s excellent. (And I know, that’s like saying “They didn’t have beer, just a somewhat-contrived spinoff called Reeb. Still, the quinceañera was a blast.”)

Wario Land is the only VB game that really scratches the surface on what the system can do — and could’ve done if Nintendo hadn’t cut it off after only a handful of games. The graphics are great, the gameplay is wonderful, and they make a strong effort to integrate the 3D (although, as I said once before, it’s kinda like “Wario gets big and close, Wario gets small and far.”)

2 | By ignoring its repeated warnings to avoid eyestrain, we learned to challenge authority

Every 20 or so minutes, the Virtual Boy tells you to take a break because staring into it for too long is bad for your eyes. And you always ignore that warning and plow on through. Which, I say, is a good thing. Virtual Boy players learned it was OK to question The Man.

Remember the Milgram experiment, where test subjects were willing to seemingly administer lethal shocks to innocent strangers just because an authority figure told them to? Wouldn’t happen after playing Virtual Boy.

According to an interview with a Virtual Boy game developer named Hideyuki Nakanishi — and he’s Japanese, so you know you should listen — people who worked on the system found it actually was *good* for your eyesight.

He says, quote, “The stereoscopic capability of Virtual Boy is effective in training the muscle of eyeballs” — and that several companies were actually developing cartridges for the machine that would help people improve their eyes. But that all got shut down when Nintendo discontinued it.

Those games would’ve been like Brain Age but for the eyes. I would say Eyes Age but then I’d just be tempted to make a bunch of puns. And that wouldn’t be cool.

That’s a de facto endorsement from both Julia Roberts AND Richard Gere. I only wish they’d incorporated it into their next movie, Love Is Nice.

5 | Mario Tennis is like a better version of Pong

Mario Tennis was the game that shipped with the VB. This was back when consoles were guaranteed to come with a game. (And that game was never a combo pack of Kung Fu Panda and Lego Indiana Jones.)

Mario Tennis was a fun game that anyone could pick up and play instantly. Sure wasn’t tennis, though.

It was closer to Pong, but with a little more movement and a handful of characters from the Mario universe.

And that’s OK. There’s a place for a game like that. Mario plus Pong multiplied by gentle quasi-3D effects equals a smooth, smooth transition into the world of Virtual Boy. It’s like a vegetarian easing their way into being a normal by starting with chicken soup broth or mild sliced turkey. You don’t jump back in by going to a Chili con Carnival or entering a KFC Double Down eating contest.

6 | A decade-and-a-half later, the foam padding has still maintained its smell

I just played my Virtual Boy (still works perfectly). The foam still smells like the day I pulled it out of the box. I’m sure whatever chemicals are responsible for that are now banned in the U.S. and I’m probably on the on ramp to the Mesothelioma Highway… but damn, that smell makes me irrationally nostalgic.

I miss you, mid ’90s. Someone find my Umbros and put on Third Eye Blind. 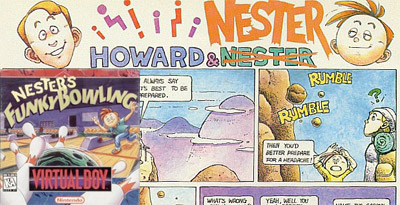 When Nintendo Power magazine came out, they introduced an above-it-all cartoon character named Nester. The magazines would feature him in comics talking to the then-president of Nintendo of America, Howard Something.

Nester isn’t exactly one of Nintendo’s home run character creations. He checks in somewhere below the Balloon Fight guys and somewhere above that unbelievable asshole Dry Bones. So the only time he ever made the transition into headlining a video game was here on Virtual Boy, when they made Nester’s Funky Bowling.

There isn’t anything particularly funky about the bowling — the game is just a straight-up bowling game — but I guess whatever Nester does is funky.

Anyway, I’m not including it on the list because I’m a closet Nester fan or anything like that — more because it shows off Virtual Boy’s edginess and deviation from the norm. Or something like that.

No word if, like in the movie, you finish the game when you realize that you’ve just been holding the map upside-down and sailing in the wrong direction for eternity and if you turn the map and ship around you’ll find dry land.

(Do you have to give spoiler alerts when discussing Waterworld?)

(Yes, that’s really what happens at the end of the movie.)

(I still think The Postman was worse.)

9 | The controller is really the grandfather of many future controllers

The controller design was really one of the first of its kind… and a design that Nintendo and others would use a lot going forward. Dual control pads, the yoke-style handles, everything.

Other systems would not, however, make the mistake of building their unit’s power supply into the controller. Not sure why Nintendo went that direction with the Virtual Boy but this thing sure as hell was heavy the one time I put in 800 batteries so I could get 17 minutes of gameplay.

You place the entire top half of your face within the black foam, as any light interferes with the graphics. You plug in headphones because the music sounds mediocre coming from the built in speaker. You gaze deep into the Virtual Boy, a seemingly endless three-dimensional abyss. And you realize — I am completely closed off from human contact. What other video game system offers THAT?

11 | You still look totally cool playing it, even today 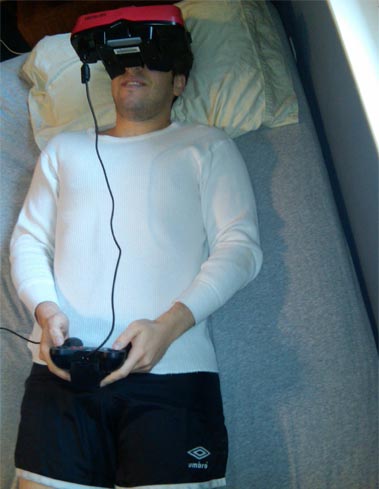 “I want something else, to get me through this, semi-charmed kind of life.”