Votes for Obama, World of Warcraft coins, tickets to see the giant panda… and then, the actual weird stuff.

A few weeks back, a woman in Philadelphia was arrested for posting on Craigslist that she’d have sex with someone if he could give her World Series tickets.

I dug through the bowels of the Internet to find 11 much, much, much more ridiculous sex trade offers from the history of Craigslist. In some cases, the person wants something and offers sex in exchange. In some cases, the person has something and wants sex to get it. But either way, it’s a trade-off involving weird sex, weird items or, ideally, both. Enjoy. 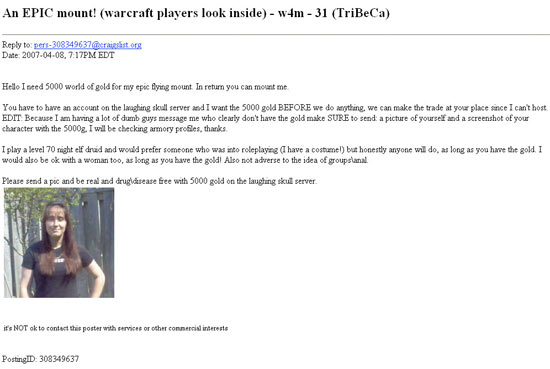 I don’t really know about World of Warcraft (outside of the Leeroy Jenkins video and the spectacular South Park parody) — but I do know there have often been legal debates about the real world value of virtual in-game goods.

So, it seems, after she posted this it (naturally) got passed around a bit. With so many people invested, she was kind enough to post a follow-up.

Turns out she found someone willing to trade 5,000 virtual coins for real-life sex (I’m just spitballing here but I bet she had more than one offer)… it was “very enjoyable”… and now she’s using those coins to become 280 percent stronger in the game. I’m actually impressed. 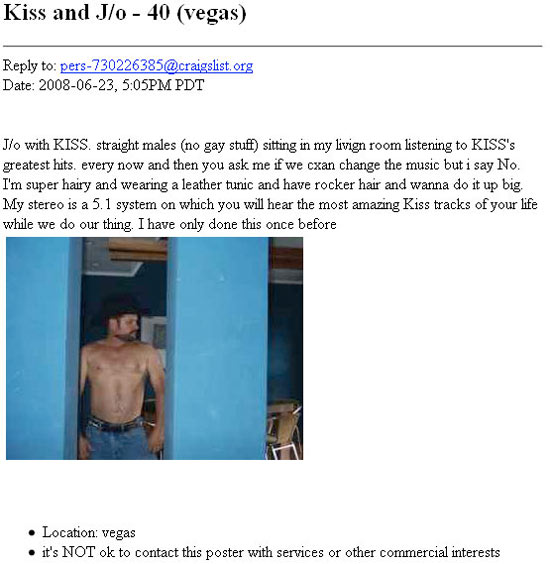 As for this gentleman who wants you to come over and smack yourself around to the dulcet strains of I Was Made For Lovin’ You… please note that he wishes to maintain full veto power over the music. He will refuse your request to change it. After all, he’s the expert who’s done this before.

3 | Tickets to see a giant panda 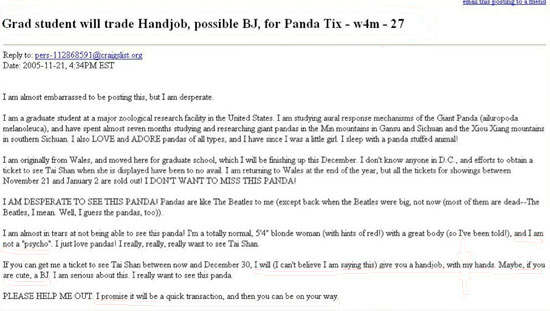 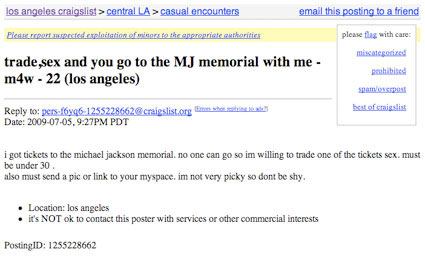 And sadly, this level of exploitation of Michael Jackson’s death doesn’t even compare to what Jackson’s family members are doing.

5 | A chance to do a nude, post-masturbatory Godzilla impression and all the artificial crab you can carry 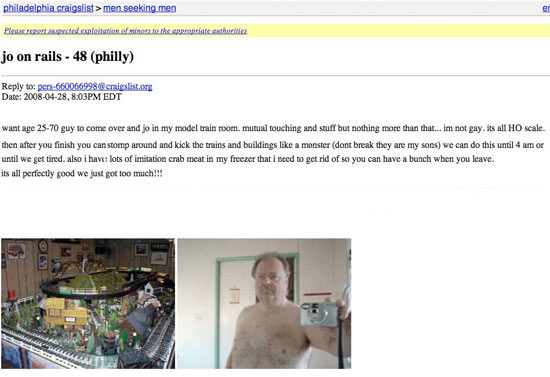 But don’t break them, because they belong to this guy’s son.

After that, you can be on your way, with an armful of imitation crab. Sounds like kinda a fun night. I’d definitely make it until four in the morning.

6 | A death wish TO THE EXTREME

You see a headline that says “Unsafe sex” and you think: No condom. This guy writes that headline and thinks: Sex in a car going 110 miles per hour, or while bungee jumping, or in shark-infested waters.

I suppose that really is a more classical definition of unsafe sex.

Also, please notice that his location is “THE DANGER ZONE.” Man I hope that means that while you’re having sex in a car doing 110 there’s Kenny Loggins just blasting out of the stereo.

7 | The risk of getting HIV 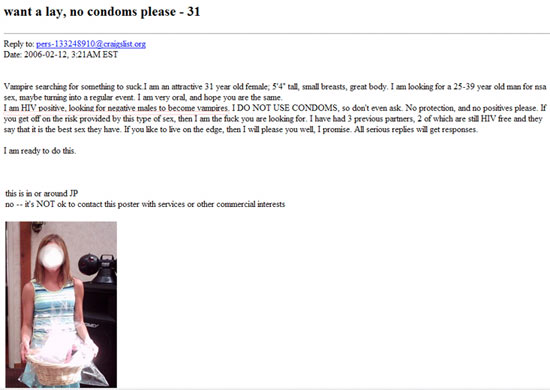 So the guy above wasn’t dangerous enough for you? In this ad, an HIV-positive vampire wearing a bright-colored sundress wants to have unprotected sex with you. You get to enjoy the risk of getting HIV. Sounds like fun. Remember when we were kids and collecting baseball cards was fun? Fun has evolved.

Also, I had to read it twice before I picked up the nuance that “I have had 3 previous partners, 2 of which are still HIV free.” So she’s already given HIV to someone? She’s a very bad vampire… not the frolicking, baseball-playing, brooding, Mormon vampires that all the kids are so in love with. 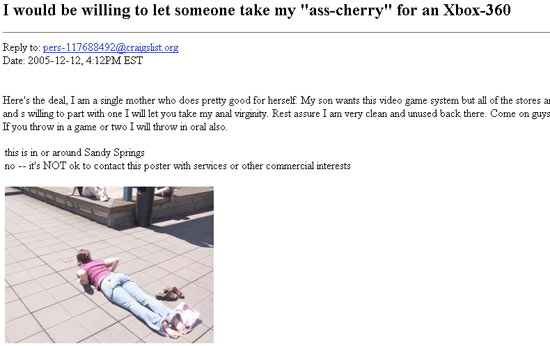 In a vacuum, sex for an XBox 360 isn’t a strong enough trade to make this list. But there are a few extra little throw-ins that elevate this to legendary status…

And that list doesn’t even take into account this woman’s choice of photo which, I guess, is her way of “presenting” the bounty. 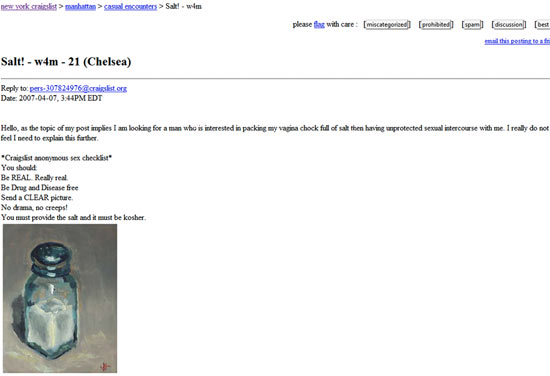 So this woman wants you to bring over some Kosher salt — “must be Kosher” — then pour it into her vagina and have unprotected sex with her. (And it.)

This request struck me as potentially very dangerous — the vagina seems to be such a fragile ecosystem that pouring eight to 10 tablespoons of salt in there seems like it would be a bad idea. So I texted my friend Rob, who’s a doctor, to ask him about it.

I wrote: “Hey! I have a weird medical question I figured you might be able to help. Is it dangerous for a woman to get salt in her vagina? Like a lot of salt?”

About six minutes later my phone started ringing. It was Rob. He was concerned that I had a female friend who’d spilled a lot of salt into her vagina. When I finally convinced him that no, this wasn’t the case of me “asking… um… for a friend” but rather for a list, he told me that, believe it or not, dumping a large amount of salt into a vagina might cause some irritation but, otherwise, no real damage. 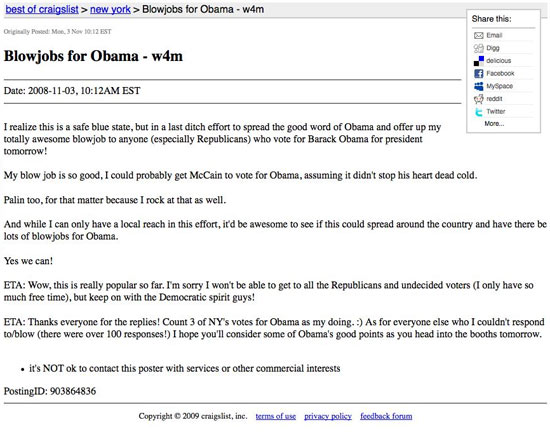 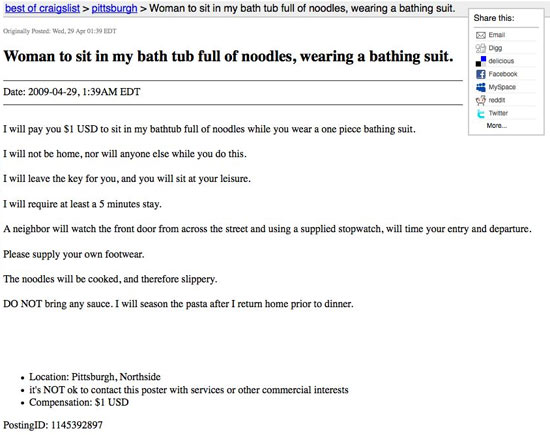 One dollar doesn’t seem like a lot but, coincidentally, it could buy you your OWN bathtub full of Ramen noodles.