Sam talks with the Guinness World Record holder for the largest video game memorabilia collection to find out his favorite items.

Brett Martin is the official Guinness World Record holder for the world’s largest collection of video game memorabilia. He has a collection worth at least $100,000 spread across more than 8,000 items.

I forced him to narrow it down to 11.

Brett and I recently spoke about the 11 items in his collection that he considers his favorites. It turned out his favorites line up pretty well with the rarest things he owns. So… which pieces of video game memorabilia are able to induce excitement out of the guy who’s literally cognizant of every bit of video game memorabilia ever made? Read on… 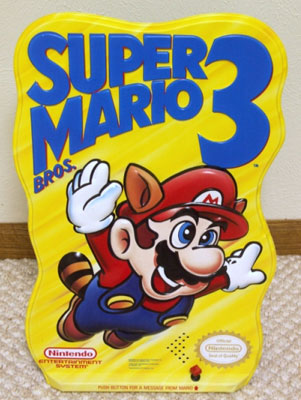 Brett: A collector contacted me through my site wanting to know if I wanted the sign, and it was amazing because I had been hunting for it ever since I discovered its existence and never thought I’d have one. It was at an amazing price as well.

Sam’s take: I figured that when you press the button, Mario says something totally disappointing like, “It’s-a me, Mario!” Not even close. I mean, that’s a part of it — it wouldn’t be Mario talking without an “It’s-a me” in there — but then, according to a video Brett posted on YouTube, homeboy just keeps on soliliquizing. The entire quote goes:

I mean — has Mario EVER talked that much before? Even when Captain Lou Albano was playing Mario he didn’t reel off chunks of dialogue like that. 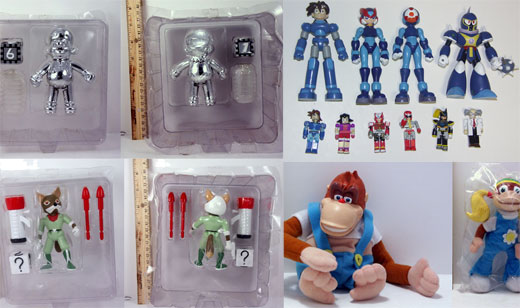 Brett: I won several auctions off of eBay from an ex-employee of ToySite that was selling the prototype figures that appeared at the Toy Fair in 2000 from a line that would never come to fruition. They are the only ones in existence, and the only figures of these characters still to this day.

Sam’s take: This was clearly during one of Mario’s particularly chubby phases. Look at the belly on Metal Mario — he looks like a snowman. Meanwhile, Starfox looks remarkably like a mix between Master Splinter and my chihuahua. 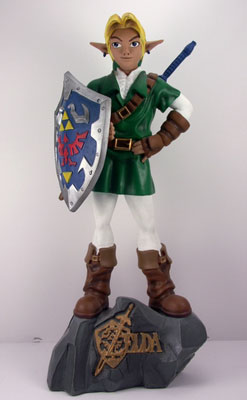 Brett: One of the hardest Zelda statues to obtain, this statue was displayed at E3 in 1997 and then the creator (OxMox) did retail a few in Europe. It is very fragile and few remain in good condition.

Sam’s take: Looking at this statue, the mind boggles that Zelda hasn’t been made into a movie. Isn’t Link just begging for a Lord of the Rings-style franchise? They’re making a damn movie out of Angry Birds. You’re telling me that’s simpler to translate to a movie franchise than Zelda? 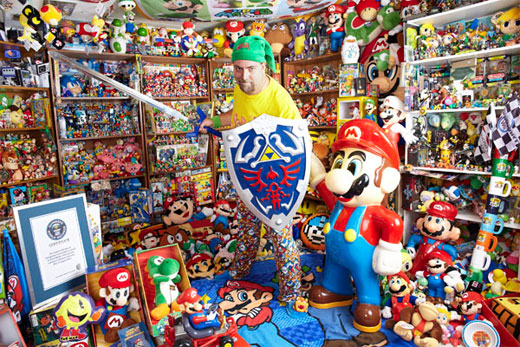 Brett: I had one of these and then sold it. Later on, I looks in the local classifieds (which I never do) and found one for sale at a price much lower than the first one I bought. I rarely find anything local, so it was an amazing grab.

Sam’s take: Let us just pray that, unlike most items you find in the classifieds, this Mario statue was not previously befouled. 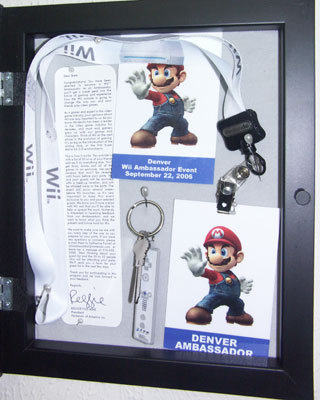 Brett: In 2006, I did an interview on Vintage Computing and Gaming about my collection that was picked up by several gaming blogs and other news outlets. Nintendo caught wind of it and tried to find me through the article. Turns out they were running a Wii Ambassador program to showcase their new system, the Wii, and were interested in making me the Denver Ambassador. The program involved me seeing the Wii at a private party with my friends before launch. The program lasted a year and Nintendo sent me a free Wii and several games and accessories in that time.

Sam’s take: I’m guessing that Brett is the only Wii Ambassador who valued his press pass and welcome letter more than the party, the free Wii, or the free games and accessories. And that’s why I love collectors. 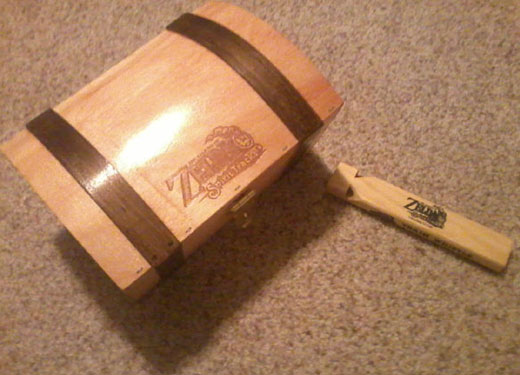 Brett: Kotaku had a Child’s Play event for several years while they were here and this was one of the items in the giveaway. While Brian Crecente (then editor of Kotaku) handed me the whistle before the raffle, I bought the chest off of the winner at the event. It was only given to press and is extremely rare.

Sam’s take: If that whistle is anything like the whistles in all the Zelda games then Brett’s had to try blowing it in every room he’s ever entered just to see what happens. 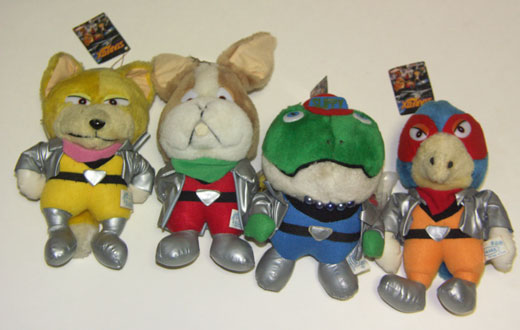 Brett: I won this incredibly rare set of four plushes from a Japanese auction after losing three such auctions beforehand. I got the best price of the four auctions, and they were in immaculate condition.

Sam’s take: I’ve never played Starfox but these guys still look like a lot of fun. And also like they would be evenly matched in a fight against plush dolls of the characters from The Wind In the Willows. 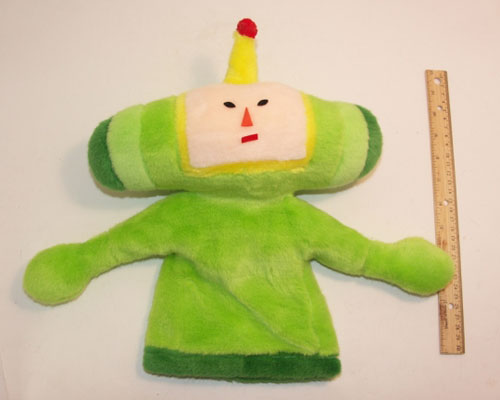 Also won at a Kotaku charity event. It was the one item in the lot that I had my eye on and I won it.

Sam’s take: Wait a minute — this isn’t from an old school Nintendo game! None of the Katamari series has ever been manufactured for Nintendo. This is like someone who has a massive collection of old Coca-Cola memorabilia randomly having, like, a RC Cola novelty crown and scepter. 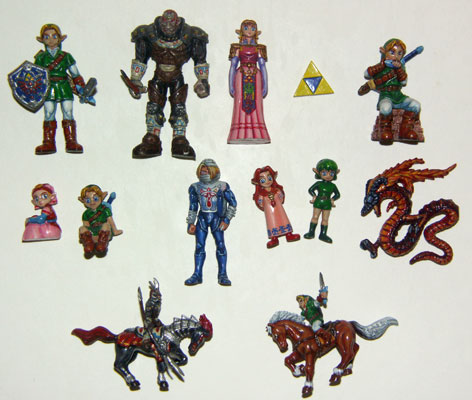 Brett: I bought this set in a Japanese auction not knowing what they were. Turns out a very talented hand painter painted a set of extremely rare, officially unpainted candy toys. It sold for very little because the Japanese collectors prefer collectibles that aren’t tampered with. It actually devalued them in the Japanese market, but to me it made them priceless.

Sam’s take: I’ve got to find a hobby that leads to me making bids for random unknown items in Japanese auctions. Sure, the odds are you’ll end up with some Hello Kitty erasers or a totally weird next-gen sex toy — but still, what a ride. 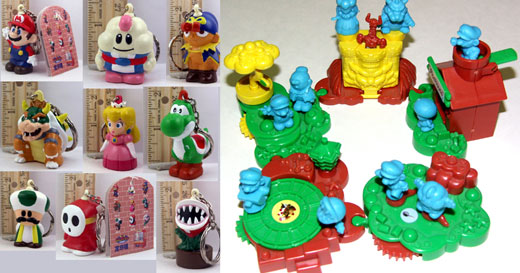 Brett: The keychain set was my first “holy grail” and it took me a while to complete the set. The playsets fell into my lap when a fellow collector posted them on my forum and I made an offer. I’ve never seen the full set for sale before anywhere else.

Sam’s take: According to a few eBay auctions I’ve found, these keychains sell for $500 each. So that’s $4,500 in keychains right there. But don’t feel bad; the lanyard keychain your little cousin made you has sentimental value that’s off the charts. 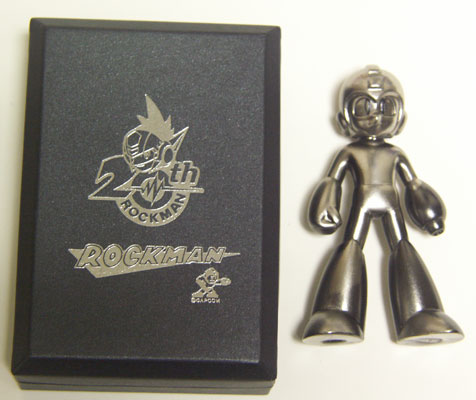 Brett: Snagged this rare mini-statue from a Japanese auction, and since then have not seen another for sale.

Sam’s take: I didn’t realize that Mega Man was called Rockman in Japan. It’s strange, because “Mega Man” seems like a very Japanese name for a character. Although that’s not as confusing as Street Fighter in Japan — the characters we know as Balrog, M. Bison, and Vega are known as… wait for it… M. Bison, Vega, and Balrog respectively. I am fairly sure I could never, ever get my brain to run that three-man weave.

You can see the rest of Brett’s massive collection at his website, the Video Game Memorabilia Museum.