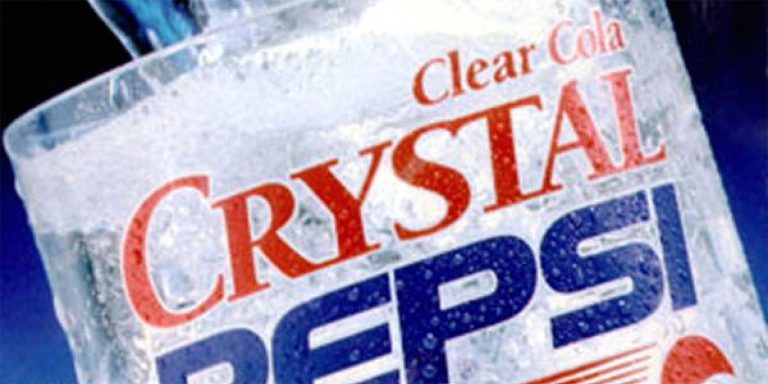 Even though “experts” say you shouldn’t, I drink a lot of soda. Even though now I exclusively drink diet soda, apparently, that’s still unhealthy. Seems better to me than drinking a lot of milkshakes, though. Healthiness is very relative.

I thought it’d be fun to put together a list of 11 sodas that have rubbed me completely wrong over the course of my life. Because negative opinions are a lot of fun.

I was absolutely enamored of Crystal Pepsi back when it came out. I mean… It Was Clear. For the love of God, It Was Clear. It also tasted approximately two percent like actual Pepsi and the other 98 percent was pure torture… but It Was Clear.

For some reason, this seemed to be the official drink of my Sunday school growing up. Whenever it was time for a treat for us and they’d bust out soda, it was invariably Cotton Club’s Cherry/Strawberry. No further brand name needed, I guess. Maybe it’s the Kosher-est soda or something, which was my only explanation of why it got full reign.

In general, I don’t like fruit sodas… but this was the worst. The taste was incredibly artificial… even my nine-year-old palate could tell that. It was ridiculously sugary. And, possibly worst of all, after drinking a glass of it, you’d end up with that terrible red-ring-around-the-mouth look that’s even embarrassing when you’re in fourth grade.(Interesting side note: After I wrote this, I tried to find a photo of Cherry/Strawberry and could not. I think it may be a fairly Cleveland-centric regional drink. But know it exists, and all that I said is true.)

I’ve never liked ginger ale. I’ve never enjoyed it’s not-so-smooth, incredibly bitter taste. When I’ve had a flu or stomach ache and someone’s suggested drinking some ginger ale, I’ve chosen to remain in pain. And no, my dislike of ginger ale is not correlated to my dislike of ginger people, with their bright red hair and pale white skin and millions of unseemly freckles.

Coke made a big mistake with most of their Coke with [insert flavoring here] brands: They went too heavy on the flavoring. A splash of vanilla would be good. But, I guess, in order to justify calling it “Vanilla Coke”, they just had to dump as much vanilla as they could into the mix. And that just makes it taste gross.

I’ve never, ever liked artificial grape flavor. Of all the fruit flavors, it’s my least favorite. Grape Blow Pops, for example, taste like Cough Syrup on a Stick to me. So, logically, I don’t like the flavor of any grape sodas. It’s just the basic transitive property.

I just can’t feel normal drinking a Tab. Something about grasping that pink can of a soda that was once exclusively marketed as a diet aid takes me back to the ’80s, and not the good part of the ’80s. Not the ’80s that generic comedians make comments about on an infinite number of VH1 shows. The seedy underbelly of the ’80s.

– Back when I was a kid, there was a huge mystique around Jolt. We heard it had so much caffeine that if you drank it, you couldn’t fall asleep. We heard you couldn’t buy it without your parents’ permission. We heard a kid in Canada had died from drinking five cans of it.

Needless to say, when I finally did drink it, I was extraordinarily disappointed that it just tasted like thick, not-as-delicious Coke. Also, I went to sleep normally that night, bought it on my own AND didn’t die like that kid in Canada. Overall a really crappy Jolt experience.

As an only child, my family did not have a Sam’s Club membership. We only needed to feed three people. Also, my parents have a deep fundamental issue with paying a fee to have the right to shop at a store. But, a lot of my friends’ parents didn’t have such an issue… and also popped out a few more kids… so they had Sam’s Club memberships.

Sam’s Club always sold its own generic rip-off brands of soda. Continental Cola was their Coke, Twist-Up was their 7-Up, Dr. Thunder was their Dr. Pepper and Mountain Lightning was their Mountain Dew. I don’t really remember if there was a depreciable difference in taste between these knock-offs and the originals. All I know is that I felt so bootleg holding a can of Continental Cola that I would just opt for water. And no kid opts for water when soda’s available.

This has wronged me more than anything else on this list. Now I’m wary of putting a splash of Coke in anything, for fear that it’s just being used to mask the taste of five other liquors poured together.

I really used to like orange soda. I believe it’s the first soda I ever had. But as time went on… and I learned about things like “health” and “ungodly amounts of sugar”… I had to get rid of it. A can of orange soda has more sugar than a can of Coke. And if I’m going to hop on the Type II Diabetes Express, I’m buying my ticket in the donut car or ice cream cake car.