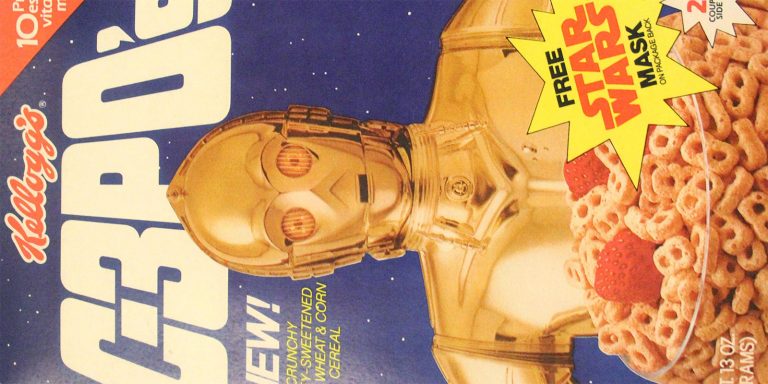 While I was researching this list, I learned something new: Pretty much every TV, movie and video game character that even remotely appeals to kids had been slapped up on a cereal box. 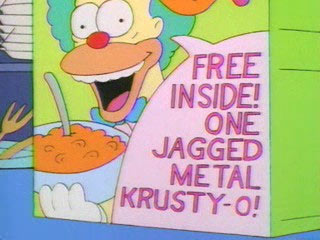 The principle, of course, is that kids are idiots, and they’ll happily choke down garbage as long as the Rugrats are traipsing through Paris on the box in front of them.

I went through hundreds of cereals (the vast majority of which are made by the company Ralston, which, not coincidentally, was owned by Purina) to find the ones that exploit that theory the most. The ones that took a generic cereal and branded it with the character-of-the-moment in attempt to lure stupid kids into luring their stupider parents into buying it.

Here are the 11 cereals that went the furthest over-the-top… whether it’s a obscure character choice, a weird cereal flavor or some combo of both, these are cereals that would make John Harvey Kellogg roll over in his grave. (You know, if he wasn’t still sore from enemas.)

This cereal was just called “Mr. T”… not even “Mr. T Cereal” or anything. It consisted of crispy corn, shaped in the letter T. And nothing else. It’s like getting the worst box of Alpha-Bits ever.

And to add insult to nostalgic injury, the cereal isn’t even based off Mr. T’s iconic B.A. Baracus character from the A-Team… it’s based off his cartoon show Mr. T — which ran from 1983 to 1986 yet only churned out 30 episodes. In said cartoon, T was the coach of a teen gymnastics team… which would travel around the globe and solve mysteries.

It’s like Scooby Doo meets… uh… tiny, muscular, shaved men and girls who stopped their menstrual cycle. (All of which coalesced in an uber-banal cereal.) 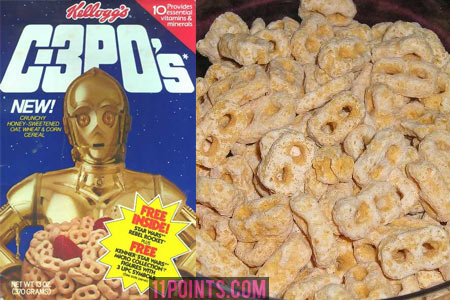 This Star Wars-themed cereal came out in 1984. It was just a generic tasting mix — “crunchy honey-sweetened oat, wheat and corn cereal” — and was part of the Star Wars plan to have merchandise in, literally, every single possible sector. (Han Solo cups? Boba Feta cheese? Chewbocci balls? I could go on.)

Exploitative, sure… but as much as I want to bag on it, I love that they called it C3PO’s. During my research, I found a Finding Nemo-themed cereal called Honey Nut Nemo O’s. Today’s marketers are so content to just rubber stamp these exploitative cereals that they don’t even think about contracting two “o” sounds into one. 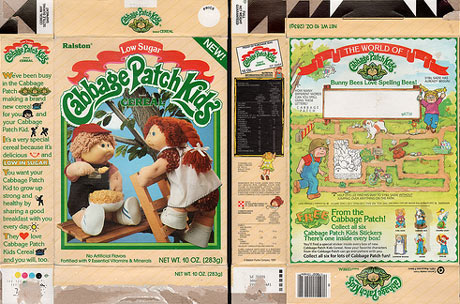 Cabbage Patch Kids are one of the best fads of all time, so naturally kids would want to cannibalize their heads for breakfast.

The cereal, shaped like fat little Cabbage Patch faces, was actually one of the lowest-sugar kids cereals ever made, at just three grams per serving. I like that ironic twist. Keep the dolls fat, not the kids. 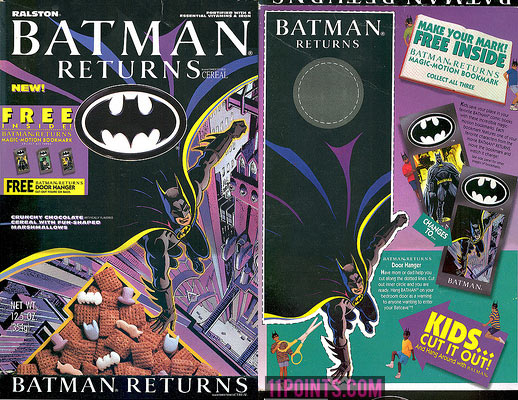 It always feels so greedy to over-merchandise a sequel. It’s just unfair to parents. You didn’t see the Police Academy people trying to force-feed the youth of this country “City Under Siege” t-shirts or Nick Lassard action figures.

There have been a number of cereals based on sequels (I found Spider-Man 2 and 3, X-Men 2, Ice Age 2, Shrek 2, Pirates of the Caribbean: We Wrote the Script In A Week and even Ghostbusters 2). But this one stuck out because (1) even though it was PG-13, Batman Returns really wasn’t for kids and (2) really? Batman Returns?

The cereal itself, however, looks like a delicious dessert — the only way it could be “part of a nutritious breakfast” would be if you ate it with a side salad that uses multivitamins instead of croutons. It looks like Chex, but chocolate flavored… with Batman-themed marshmallows on top. That’s so British. 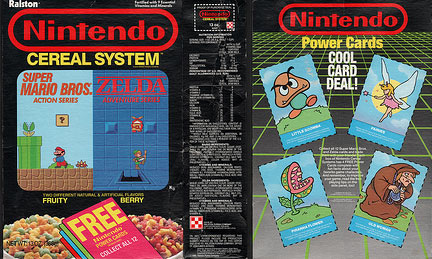 This one holds a special place for me because I was one of those kids that lusted after every single thing bearing the Nintendo insignia. They had me brainwashed (like in the “Chimpokomon” episode of South Park) to a serious extent; I’m just glad Mario never started telling me to set fires.

Just so disappointing. It was pretty much the biggest disaster ever associated with the Super Mario brand. (That is, until Mario Kart: Double Dash came out.) 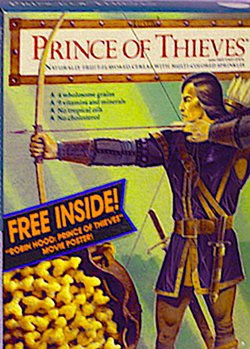 So… you couldn’t get Kevin Costner to pose for the box cover? Or even someone with a bone structure in the same ballpark?

Also, if you look at the shape of the cereal pieces… are you sure that kids are going to think those are shaped like arrows? I was 11 or 12 when this cereal came out… and I can assure you, I would NOT have looked at those and said “arrows.” 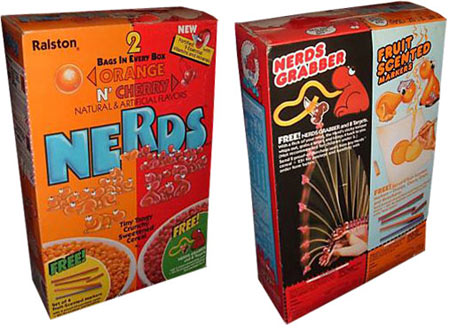 There’s a fine line between the sugar content in candy and breakfast cereal anyway, so the transition wasn’t too hard for Nerds.

The cereal featured the classic Nerds half-and-half split… one side had orange cereal and the other side had cherry. (Another version came out with strawberry and grape, too.) Of course, none of those are actually GOOD flavors for cereal, but, as this list shows, that’s never really the issue.

Unfortunately, Nerds has the legacy of being a product that was actually taken down by an urban legend: Kids believed that if you ate this, it would turn your feces bright red. For some reason that scared us more than the other urban legends of the era (Mountain Dew makes your testicles shrink… Pepsi cans have syringes in them… Beetlejuice pops out of mirrors) — which brought the end of Nerds cereal. 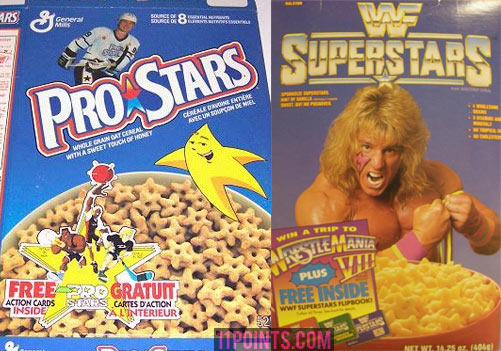 Pro Stars was a Saturday morning cartoon that lasted for just under three months in late 1991. Yet somehow they had time to squeeze out a cereal.

The cereal box features a photo of Gretzky… he must’ve been the one whose agent wrangled “food spin-off rights”… and the cereal itself is star-shaped oats with a “sweet touch of honey.”

Yes, like many of the other cereals on this list, the creators mistook “interesting shape” — in this case stars — over “innovative/delicious/unique taste.” The WWF made the same mistake when they rolled out their cereal shortly thereafter… with exactly the same shape. 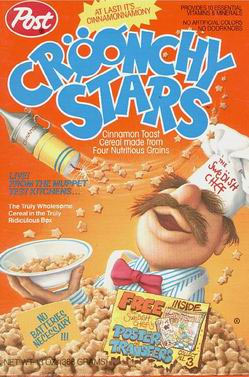 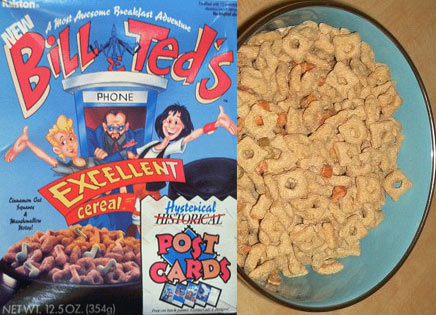 Unlike every other movie-turned-shitty-cartoon in history, the actors from the movie actually did the voices for the cartoon. Keanu Reeves, Alex Winter and, sigh, even George Carlin voiced their corresponding characters. At least for the first season. They all bailed after they realized what they’d signed on for.

As for the cereal… well, it actually looked (and by all reports, tasted) more like pet food than any other cereal ever. And that includes Fiber One. 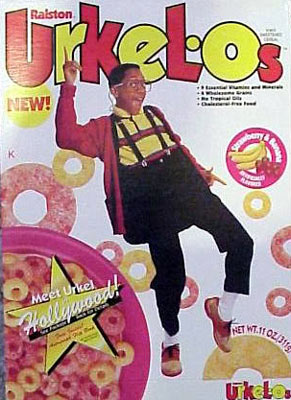 I’m not sure you could really understand the Urkel thing unless you lived it. Why people liked him so much. Why every single person today ages 23-63 could still easily pick him out of a police lineup. Why he got his own cereal.

But he did. It consisted of banana-flavored yellow loops and strawberry-flavored red loops. The two most common words associated with its taste are “weird” and “artificial.”

More importantly, it has the distinction as the one cereal that really sums up this list — a mediocre flavor marketed around a character with no chance of standing the test of time. If that’s not the pop culture tie-in cereal business in a nutshell, then nothing is.