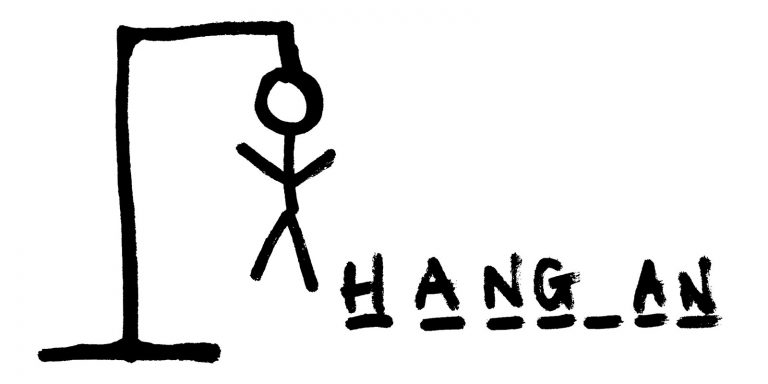 If winning is everything to you, here’s how to dominate hangman like I do. That’ll show those kids.

Ya know, they say video games are violent. But long before there were video games, people were playing a game where they happily snapped a man’s neck just because the letter “b” wasn’t in a word.

I know it’s a little obsessive to write an entire list about dominating Hangman since, most likely, you’ll be playing it against a 10-year-old cousin or something. But a win is a win. Also, you might play the Hanging With Friends app which isn’t pure Hangman but certainly draws from it. (It’s nice to see Zynga rip off a game that isn’t copyrighted occasionally.)

So much like my list of 11 Strategies For Dominating Monopoly (hint: mortgage everything and go for the kill immediately), here’s my list of suggestions for dominating Hangman. Now you show those tweens who the REAL genius is.

1 | Aim for a simple Hangman

You don’t want to play Hangman where he gets gallows plus a head, body, two arms, two legs, hands, feet, eyes, nose, ears, mouth and penis. Since you’ll be picking more difficult words and making smarter letter guesses, you want as few turns as possible between guessing and death. Six is the minimum, eight is ok, 10 and 11 are standard. I recommend starting by pushing six. You’ll get a big backlash for at least 10, maybe 11, 12 or 13. Make a big deal about it — “That’s half the alphabet!” — and finally faux-acquiesce to eight, which is what you wanted all along.

You want to play short words. If you say anything like “No minimum size on words, right?” or “Any length word is ok?” then you’re inviting discussion on the topic. If you don’t mention it, anything goes. Remember: Just like in life and cognitive dissonance land, lying through omission isn’t actually lying.

3 | Hustle the other person in by curbing early cleverness

Assuming you’ll play multiple games, you’ve got to treat this as a long term play, not a “take it one game at a time” cliche. And that means you need to run a minor hustle as if you were a pool player with the same first name as a state (male) or lethal Korean woman in a catsuit (female).

As we’ll get into below, “jazz” and “buzz” are the hardest words to guess. But if you bust them out first, you’ve shown your hand. You’re an obscure letters guy. And then you can get blown up because your opponent will stop guessing nice, suburban letters like E and S and start guessing letters from the wrong side of the tracks like X and K.

So for your first word, go with a difficult but not too aggressive pick like “embryo.” Or sucker them in even more with a word like “rhythm” or “crypt” or “gypsy” — that will make them prematurely guess the mediocre letter Y for several games to come.

I’ll be referencing this statistical analysis quite a bit through this list. But the best way to win at Hangman is to give the other person a brutal four-letter word.

The hardest word to guess in Hangman (at least against a computer or a rational human)? Jazz. Based on letter frequency of words in the dictionary, J is the least common letter and Z is the fourth-least. (Although A is more common than I in terms of vowels. So if you’re playing Dirty Hangman, take that as a hint.)

Buzz and jazzed are the next hardest words to guess, followed by hajj. If someone challenges you that “hajj” isn’t a real word, play the race card.

5 | After one or two turns, get off the Z words

So a word with a double Z is great for an early win. But after you get that victory, you’ve just made the other person savvy to your style.

So now you can dip down into other good four-letter words to obfuscate the other person: Hajj, jinx, puff, jiff, zine, junk, fife, foxy, jays, and duff (or Fudd, if proper names of imaginary beers are allowed).

6 | Prepare for the switch to longer words

Five-letter words can include fazes, foxed, waxes, staff, babes, and joker. Also, if you want to go back to using multiple Zs, you can do jazzy, fuzzy, fizzy, dizzy and swizz. Which isn’t just the made-up first name of the guy who used to make beats for DMX, apparently.

If you then have to switch to phrases, just combine a few of these awkwardly. Like “Foxes Like Jazz” or “Queuing With Babes.” And if your opponent questions the validity of your phrases, you can always say they’re the names of indie bands.

8 | For almost every word of every length, your best four guesses will be vowels

In the next point you can see which vowel to guess first. But the rule should be roughly this: Guess E with your first or second turn. I and A are next, then O.

We’re conditioned to gravitate toward T, but based on a conditional probability analysis, it’s never a great guess in the first four letters. Just because it’s popular doesn’t make it right. Like watching Bachelor Pad. The best guesses are vowels, even U. S is the best consonant to guess, although if it’s at the end of a word it doesn’t give you much valuable guessing information.

9 | Strategically pick your first vowels based on word length

Based on a breakdown of the standard dictionary, A is the most common vowel in words four letters long and less. E is most common in six- to 12-letter words. I is most common in words 13 letters and longer. U is always the least common. O is more common in short and long words than mid-length words. But vowels are virtually always the best statistical plays — and nothing says “double the fun” like bringing math into a word game.

Since we’ve all watched Wheel of Fortune forever, we know that R-S-T-L-N and E are roughly the most common letters in English words. But we also know that no one in the history of Hangman has gone with the word STREETS or RESENT or, fittingly, LETTERS.

So after you’re done with a few vowels, each time you correctly guess a common letter, guess a less-common one on your next turn. Based on what you’re seeing in the word, there’s a lot of mileage in D, G and B — and even the more infrequent F, V, K and W.

11 | Use the other person’s guesses to eliminate obscure letters

11 Strategies For Beating Blackjack, In Order Of Effectiveness