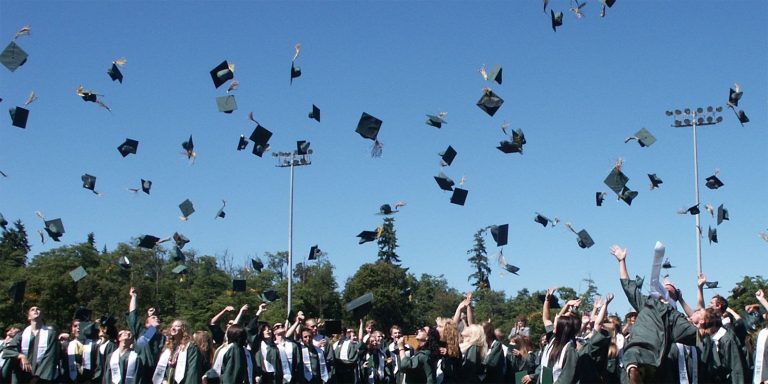 Your sports, yearbook, activities and more will come up more than you expect — and more than they should.

At age 30, I’m shocked how often I find myself in discussions about stuff that happened in high school. I mean… I started high school in August of 1993. That’s more than 16 years ago. I graduated almost 12-and-a-half years ago. This stuff really shouldn’t matter anymore.

And yet… it does. Quite a bit, actually.

I put together this list of 11 things from your time in high school that keep coming up, even as you get into fourth decade of your life.

1 | What sports you played

This comes up, not just to relive Al Bundy four touchdown game-esque glory… but also because people use their high school sports resume in an attempt to prove their current athletic prowess. E.g…

Sure, now you’re 30… you haven’t gotten in any non-hot tub pool in six years… if you squeezed into a Speedo now even a European man would give you a disapproving look… AND you have enough body hair that it’d cost you $300 in razor blades to shave it all off… but, yeah, triathlon. Shouldn’t be too tough.

I’m casting stones, but I’m not at ALL immune to talking about my high school sports “glory,” by the way. When I was a kid I absolutely loved basketball (it was the early ’90s, the NBA’s heyday) so I wanted nothing more than to excel at it. I went to camps, I did ballhandling drills in my driveway and, yes, all 65 inches of me (at the time) went out for the freshman basketball team.

I got into about four games all year. I took one shot, a 16-foot-or-so turnaround jumper off an inbounds pass. And I made it.

I still talk about how I’m tied for (and, possibly, sole possessor of) the Beachwood High School record for career field goal percentage, at a cool 1.000.

2 | What age you lost your virginity

Extremely relevant in adult life. Everyone wants to know… and judge. Of course, not everyone loses their virginity in high school… which also brings on judging.

Which brings us to this… the official 11 Points list of judgment, based on age of virginity loss and gender.

I hope that helps.

Somehow, as you move from place to place, your high school senior year yearbook finds a way to travel with you. And people tend to find it. And look through it. And draw conclusions from it. 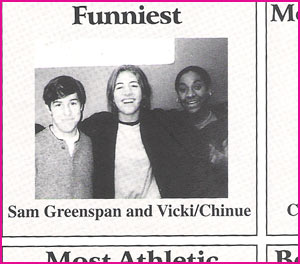 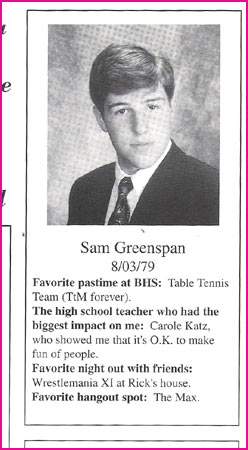 As you can see from mine, I was far more studious (looking) back then… but still quoting Saved by the Bell like a pro. I was also voted “funniest,” which bothered me at the time, under one of the unbreakable theories of the universe: People who believe they’re funny or smart only want to hear they’re attractive, people who believe they’re attractive only want to hear they’re funny/smart AND attractive.

4 | What dorky activities you did

Somehow, all of these come up on a regular basis. Your adult friends and co-workers will know all about them. They’ll even use them to make fun of you.

“Who’s going to give the presentation about the Jenkins account to the investors tomorrow.”

Might as well get your clubs tattooed on your arm, because they’re with you for life.

5 | The time you got arrested

I was never arrested in high school. The one night when all my friends got arrested (still referred to as the “BB Gun Incident”) I was out on a date with my new girlfriend.

But for people who do have high school arrest stories… they always come up. Odds are, once you became a functional adult, you stopped getting yourself arrested. (Other than possibly a DUI.)

DUI stories aren’t funny or fun. They’re depressing and awful. But, assuming your high school arrest didn’t lead to you going to juvie and potentially running into some Kevin Bacon-type evil prison guards, perspective has turned the story entertaining, nostalgic… and, surprisingly, happy.

6 | Whether you were held back

This comes up as people figure out your graduation year based on reverse-calculating your age.

And then poor Ronnie has to explain how he got put into the special class where they only have circles of paper and play musical chairs with more chairs than kids… and it’s all because he needed glasses and once they figured that out he went on to become a successful chiropractor or something.

The moral of the story: If you were held back, it’s probably gonna keep haunting you. (And, unlike 15 years earlier, being held back no longer gives you the advantage of being bigger than your peers… so the intimidation factor you used to possess is now washed away in a sea of stigma.)

People love talking about the cars they drove in high school. In almost every case they were your parents’ cars (or old cars)… and they’re always comical. 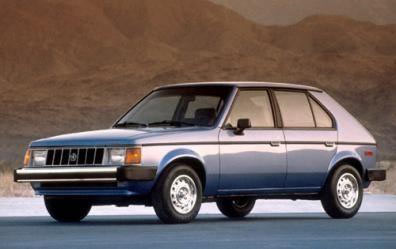 Mine, for example, was my mom’s on-its-last-legs white 1988 Plymouth Horizon. It was a hatchback (though not with an eight track or a spare tire in the backseat, but that’s flat). My girlfriend’s was a 1986 Ford Taurus. (She grew up in the Detroit area. Everyone high school kid in suburban Detroit drives a Ford Taurus that’s approximately eight to 12 years old.)

It’s an endless source of amusement telling and hearing “my shitty car” stories. It’s not as fun to talk to kids who grew up rich and had nice cars. That doesn’t build character. Picking up a girl for a date in an eight-year-old hatchback and having to charm your way past that… THAT builds character.

It’s really the only tangible measurement that people from all over the country instantly understand.

For example, every school does GPAs differently. My school did the A is a 4.0, but an A in an honors class is 4.5 and an A in an AP class is 5.0. Some schools only go to 4. I met some people from Florida whose schools went up to 7. The bottom line: It’s a completely useless, subjective, school-by-school method.

9 | How you got your alcohol, and what alcohol you drank

There’s no drinking like high school drinking. Acquiring binge drinking quantities of alcohol as a high school kid is so seemingly difficult… yet so utterly ubiquitous. Kids find a way. Kids always find a way.

As you get older, you and your new, adult friends will swap how-we-got-our-alcohol war stories nearly every time you enter a liquor store. “Back in high school, one guy had his brother’s fake ID and used to buy beer for everyone”… “Well, for us, we had a friend who worked at the grocery store who used to steal cases of Goldschlager”… “We had a friend whose older brother would buy everything for us”… etc., etc.

But that’s not all. As time goes on and drinking loses its taboo, you find yourself wistfully looking back on the days when drinking a beer was new and different. Possibly even the days when you took a sip of beer and said, “Man this is disgusting, why do people drink this?”

You’ll talk about how you tried Zima and liked it more than beer and momentarily worried about your manliness. About how Busch Light used to cost $10 for a 30-pack. About how you could drink Bud Heavy, apple Pucker, warm white wine and three shots of Listerine and not have a hangover the next day.

Even typing that paragraph brought a smile to my face. Especially now that my hangovers last six to seven days and I live in a city that doesn’t even sell Busch Light.

10 | The big scandal from your school

And when the time is right, you’re going to break out that story. Something will trigger it and your adult friends will eat it up. Everyone loves decade-old scandals.

11 | The demographic breakdown of your high school

I’ve seen this from people of all races as a justification for how they interact with people of other races. No one’s immune.

I have black friends from high school who use that experience to explain their abundant familiarity with Jews. (My public school was, weirdly, 85 percent Jewish, 10 percent black, five percent everyone else.)

I have friends that grew up in L.A. who speak pidgin Spanish solely because “we went to school with so many Latinos we just picked it up.”

The list goes on ad nauseam, so I’m going to draw a conclusion. For better or worse, we all learn more about race relations from high school than we realize at the time… and that learning persists far longer than any information we learn there in a class.

So keep that in mind when you’re thinking about home schooling your kid — the learning environment may arguably be better… but he shouldn’t learn about race relations from very special episodes of Family Matters and/or watching the clubhouse chemistry of the L.A. Dodgers.