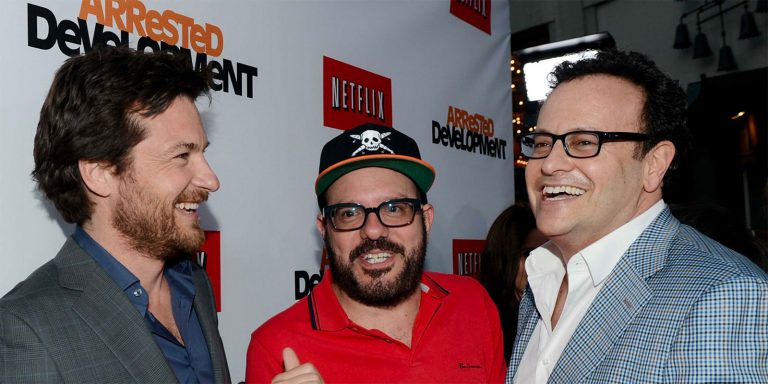 Arrested Development creator Mitch Hurwitz recently gave an interview about the show’s cancelation. What happened, according to him?

Warning: Esoteric Arrested Development list pending. Much like Arrested I’ll feign an effort to make this appeal to the audience-at-large but quickly abandon that premise and end up only catering to the hardcores. You’ve been warned.

Yesterday, I happened upon a special guest article that Arrested Development creator and genius Mitch Hurwitz wrote for the British newspaper The Guardian. (Not to be confused with Wee Britian’s newspaper, The Guardian Gnome.)

The article is bitterly titled “Arrested Development creator Mitch Hurwitz’s guide to getting a sitcom canceled” and contains a sarcastic list of Arrested characteristics that led to its premature demise.

Here are Hurwitz’s 11 reasons why Arrested Development was canceled, and my thoughts on each of them. And, in honor of GOB, these are strongly-worded and written while only lit by natural light.

Hurwitz notes that the title Arrested Development makes the topic of the show completely ambiguous. Far less descriptive than, say, Married With Children or The King Of Queens or How I Met Your Mother or Two Guys, a Girl and a Pizza Place.

My thoughts: This is a valid point, and might’ve turned off casual viewers. Even though the phrase Arrested Development is completely loaded with relevance to the show — George Sr. gets arrested for building illegal housing developments, basically all of the characters are in perpetual states of arrested development — it takes a viewing commitment to learn that. Plus the title got them sued by the early ’90s prog hip hop group Arrested Development. At least it didn’t come down to a battle between the group and the show in a game of horseshoes. A GAME OF HORSESHOES.

Rather than give this rich family a bunch of flashy cars, the Bluths had their airport stair car. (The Mercedes was far less prominent. And GOB’s Segway doesn’t count as a car.) Sure, the stair car led to three seasons of comedy gold, but not a lot of outward sizzle.

My thoughts: I don’t feel like a lack of fancy cars really contributed much to AD being canned. Feels like a stretch. From the Griswolds to the Simpsons to Jon/John Voight, a flashy car has never outweighed a crappy car that has a great comedic hook.

3 | Tried to squeeze too much into 22 minutes

My friends and I (and probably TV critics, although the memory is fuzzy) used to say that Arrested Development was the first show truly designed for the TiVo era. With all of the pausing to catch minor details… rewinding to catch things you laughed over… and re-watchings necessary to catch all of the jokes and follow the ridiculous interweaving plots, you couldn’t get it all in one 30-minute sitting.

My thoughts: This was definitely a problem for the show. Some people don’t want their sitcoms to be an active, brain-teasing experience, filled with continuity from previous episodes and plots that sometimes require gigantic flowcharts to follow. They just want to sit down and laugh at Jim Belushi making Viagra or OJ Simpson jokes. Arrested never backed down, never dumbed down to try to broaden its mass commercial appeal. It hung onto its integrity to the end… and, in the process, expedited the arrival of that end.

4 | Heavy use of comedic incest

There are few shows talented enough to carry a teenage cousin incest storyline across three seasons of primetime network television without making it seem monumentally creepy.

5 | Held too sharp of a mirror up to American society

Hurwitz wrote, “With Arrested Development, we tried showing the deep disdain that connects a family. We wanted to hold up a mirror to American society. And, just as predicted, America looked away.”

My thoughts: There’s something to this. I remember evangelizing for Arrested Development at one point and someone saying, “The characters are all such horrible people.” Which is true (the best part of Michael is that he wasn’t even close to as noble as he thought he was). But that’s where the comedy came from. The comedy that comes from the most self-centered family in the world living together and trying to pull together to face down a crisis. The plots were absurd but at the same time not sitcom-y… kind of a jarring mix of abstract madness that still hit too close to home.

6 | All the characters had the same names

My thoughts: While the Bluth family names so perfectly mimicked the Bush family… it definitely takes a little bit to get all of the names and family connections between the characters. The fact that the opening titles tried to show all of the characters, their names and their relationships in about 15 seconds… with Ron Howard narrating exposition over the entire thing… might’ve just illuminated the confusion.

Thanks to Tobias, Arrested Development did have more gay jokes than any show whose name doesn’t rhyme with Pill and Mace. Other groups got it a little bit, too, but not as much of an onslaught.

My thoughts: I don’t agree with Hurwitz here. I think the jokes were always handled so skillfully that they always — ALWAYS — come off funny and not mean. The joke is never on the minority, it’s always on the self-centered fools who don’t know how to interact with the minority. GOB saying “She’s not ‘That Mexican,’ Mom, she’s ‘My Mexican’… and she’s Colombian or something” isn’t a Mexican joke.

Back when I was writing about why I thought Tropic Thunder was the most disappointing movie of the 2000s, I discussed their handling of a retarded joke at length. How they went for the cheapest possible laugh with it at every turn. How they built the most expensive comedy of all time around the cheapest possible laugh. Compare that to the way that Hurwitz and Arrested Development handled their mentally retarded storyline. Arrested Development presented the Charlize Theron mentally handicapped arc in such a non-offensive, non-stereotypical, highest common denominator way that it should be required viewing for anyone who wants to get into comedy. Period.

Hurwitz cites the example of having Liza Minnelli on after already alienating the gay viewership.

Arrested would not have worked with a laugh track, because it wasn’t that type of comedy. It did sort of blaze a trail — 30 Rock has survived, Modern Family is actually succeeding, Parks and Recreation is still getting a shot — but we’re still in a laugh track world.

10 | Audiences like nice clothes or nudity, not a never-nude painted blue, wearing cutoffs

Having David Cross in tiny cutoffs or painted blue didn’t necessarily bring the sex appeal. Sure was funny though.

My thoughts: The cast of the show was definitely good looking but, no, there wasn’t too much nudity. Other than flashes from Kitty. And occasionally GOB. I’m not sure how much the lack of gratuitous sex appeal factored in to the show’s demise… throwing a bunch of pretty faces out there never hurts, but this show was never going to bring in the pervert demographic. The amputee fetish crowd, though, would’ve been all over it.

11 | Show had too many British sensibilities

For his 11th point, Hurwitz panders a bit to the British paper and readers.

My thoughts: The show did have some of the British comedic sensibilities — it was more The Office (Original Gangsta version) than Everybody Loves Raymond. Still, it couldn’t have been that British. I can’t recall anyone in a gorilla costume chasing around a police officer or semi-nude women. Did Gene Parmesan ever dress like that?