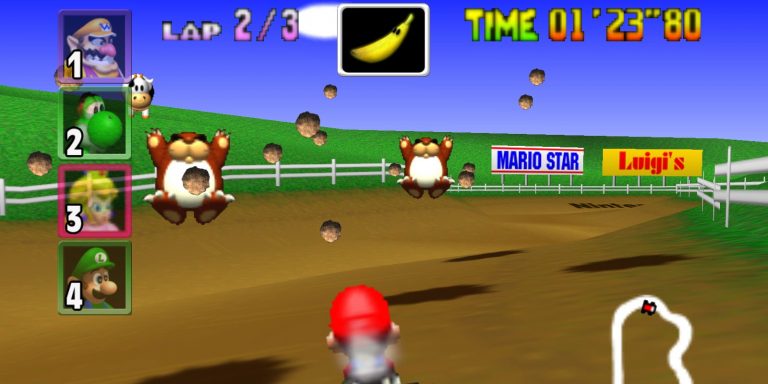 It’s hard to say what video game I’ve played the most, but Mario Kart 64 could make an argument. (It’s also one of my top picks for the best Mario games ever.) In college I competed in it pretty much constantly and even now, in adult life, my friend Bruce and I still gamble shockingly high amounts of money on our ultra-competitive races whenever we get together.

And since I’m clearly not alone, I thought it’d be a good time to go back through all of the items in Mario Kart 64‘s question mark boxes and rank them in order of usefulness.

There are 14 items total, so three didn’t make the cut. Take a sec to try to guess which. And then let’s get going.

You can only get the lightning when you’re behind, but it’s really an incredible equalizer. It shrinks and slows down your opponents AND makes it so they can’t perform a lot of crucial moves, like hopping over gaps, using mushrooms or making it across long jumps after ramps. You can also drive by and crush them. There’s no item that comes close to changing a race like the lightning bolt.

The star is close to the lightning, but I ranked it second because it’s not quite as devastating. Yes, you move faster, can’t be hit and can knock out opponents. But it doesn’t do anything to slow them down… they can still run the race as they normally would. That keeps it from being the equalizer that the lightning is. (The physics of Mario Kart 64 dictate that you going regular speed while your opponents go slow is better than you going fast while your opponents go regular speed.)

I like the ghost because it accomplishes two major functions. One: It pilfers an item from an opponent. This either gets you a great item quickly… or makes it so your opponents can’t strategically hold lightning or a star because they know you’ll just take it. And two: It makes you invisible, which protects you from shells, bananas and enemies.

There’s a big drop off from those top three items to the rest. I know this may seem kind of high for three red shells but, across all 16 tracks (don’t get me started on Battle Mode), I think the three reds prove more useful than any of the items below.

Three red shells are great for winning a race. They are direct, targeted attacks. And if you’re a good racer, you’ll get close enough to the people ahead of you to strategically use them to get into first place.

Plus, having three of them rotating around you protects you from your opponents’ shells and banana peels, which, in some cases, can be just as useful.

The golden mushroom is good… but I find it less practical than three red shells on a lot of courses. On Banshee Boardwalk, DK’s Jungle Parkway and Toad’s Turnpike, it’s generally more dangerous than helpful. It’s not particularly helpful on Choco Mountain, most of Sherbet Lane, and most of Bowser’s Castle. And on Rainbow Road, the track’s too long for it to really help close any gaps. That’s seven of the 16 tracks where it’s not that usable.

That being said… it’s still more useful than all of the items below it. The bursts of speed can be great for closing gaps on the other races, especially when you can use it to cut a diagonal across some grass, sand or shallow water (Luigi Raceway, Koopa Troopa Beach, Peach’s Parkway, Kalamari Desert, Mario Raceway, the end of Yoshi’s Island).

Targeting the leader with a shell is a strong move. Unfortunately, it doesn’t usually help all that much. The blue shell usually takes a long time to get to the leader (especially if you’re way behind). And it knocks the leader over, but you can’t possibly time it so it hits the leader at a crucial moment, like the narrow bridge on Banshee Boardwalk or before the jump in Wario Stadium.

And, if you have a blue shell and find yourself in first place, you have no choice but to hold it, because the second you fire it, you knock yourself over.

With one red shell, you can make one smart, strategic attack. On a course like Moo Moo Farm or Kalamari Desert, sometimes one red shell is all you need to claim a late come-from-behind victory.

Three mushrooms provide a nice speed boost… but nothing that can really make a difference. You can’t close a gap with three mushrooms because the speed burst happens so quickly. They’re good for restarting and regaining speed after you get knocked down, and maybe cutting a quick corner across some grass… but otherwise, they’re basically just a throw away.

One green shell can be powerful, but only if you’re a pro. Firing one of these backwards and hitting your opponent requires, basically, simultaneously watching your screen and his, then picking the right moment to fire.

It ranks higher than the other remaining items because (1) hitting someone with a backwards green shell feels fantastic and (2) it can protect you from one red shell your opponent fires, which can be important in shorter races.

One mushroom can give you quick speed burst after getting knocked down or help you on a shortcut (like the ramp at Koopa Troopa Beach). Just using one little speed burst during a regular part of a race is basically worthless.

This gets it by default. Three green shells are more likely to hit you than your opponents. One banana or five bananas just, maybe, make your opponent spin out for a sec… and they only target the racers behind you (unless you can fire the five bananas ahead with precision I’ve never seen), so they’re completely useless for catching up.

That leaves the fake question mark box, which can actually mess your opponent up. It’s good for the row of boxes on Toad’s Turnpike. You can put one on the ramp on Koopa Troopa Beach. And you may be able to fool someone into blowing up on the other courses. So it gets the final spot on the list.

And thus ends an extremely intense, pretty much joke-free list about Mario Kart 64. Which, believe it or not, I did entirely from memory.