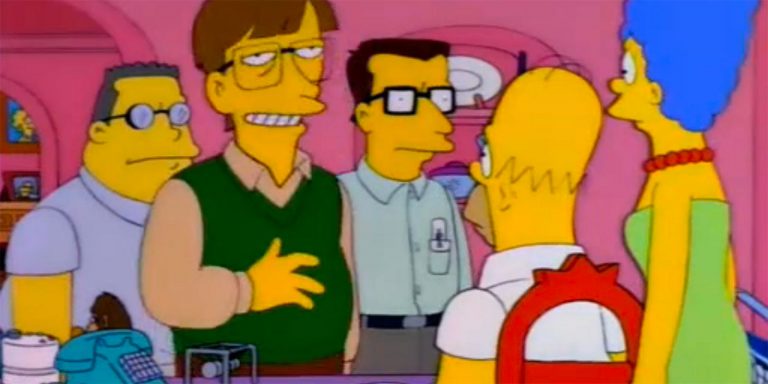 Sometimes FOX buys the URLs mentioned on The Simpsons… but sometimes they don’t.

A friend of mine was recently telling me about a business he was starting and asked for a name. I immediately went into Simpsons mode and suggested either Flancrest Enterprises, Compuglobalhypermeganet — or something cutting edge like CutCo, Edgecom or Interslice.

Just for sport, we went online and typed in FlancrestEnterprises.com. What resulted is some strange website that combines 8-bit graphics, Dungeons & Dragons, and, fittingly, Bible quotes.

This, of course, sent me on a half-day-long quest to check out websites that have been featured on The Simpsons and see where they actually lead.

(And, as a nerd-ly side note, I know that Flanders never specifically says that his website is FlancrestEnterprises.com. For all we know he went with a .org. All of the sites in this list are either explicitly mentioned or displayed on screen with their full name and dot-suffix.) 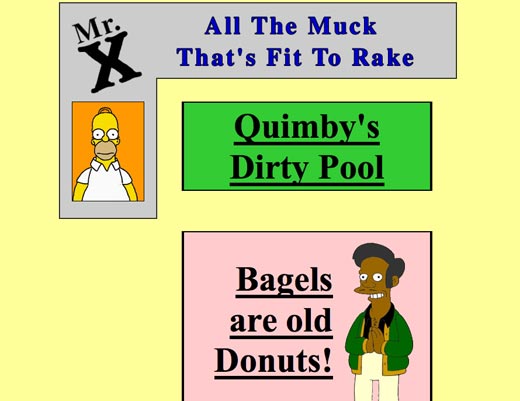 Turns out this domain name (like a few others on this list) is actually owned by FOX. And to their credit, they actually have up a functional replica of the website that Homer made when he was making up gossip as Mr. X. It even has the eternally-spinning animated page counter (though a noticeable lack of Dancing Jesuses). 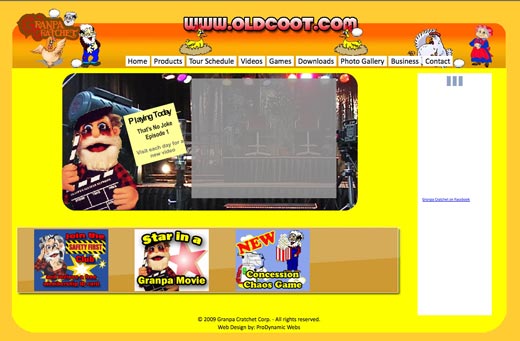 This website is namechecked in the 2003 episode where Homer spends the entire episode gearing up to fight a bear. In the episode, Grandpa Simpson shows Homer his website, OldCoot.com, where he goes to rant.

This site was already owned — name-checking a domain on TV doesn’t have the same rules, apparently, as name-checking a phone number which is why they use 555 numbers. OldCoot.com leads to the Grandpa Cratchet website, which is for a traveling puppet show.

When their site was named on The Simpsons some people told them to sue — they wisely decided against it. Take the free publicity and don’t dump your life savings into a pointless battle with News Corp. Plus, I’d suspect they might send hired goons to snatch you up and throw you in an underground bunker. 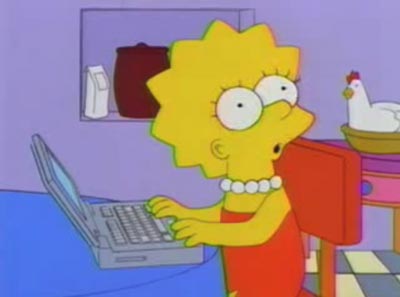 FOX owns this one and it redirects to the main Simpsons site. I would’ve been more impressed if it forwarded to a site that said “Badger, my ass, it’s probably Milhouse” — but, ya know, the people behind The Simpsons have made it abundantly clear that they’re nowhere close to as big of Simpsons geeks as the people who watch the show. 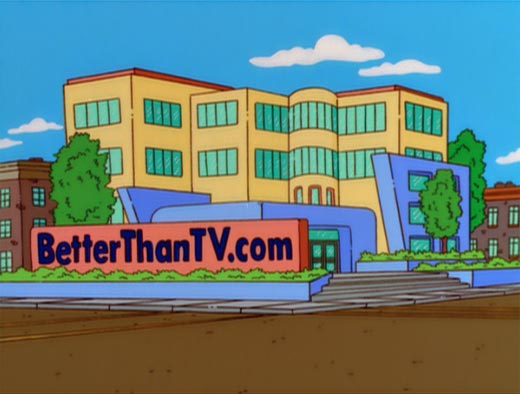 This was the episode that bought Bart’s animated cartoon Angry Dad — and promptly went out of business. I actually love the domain name — it succinctly sums up pretty much every delusion I ever encountered in my adventures in the web video industry — but now it just leads to a parked domain page. 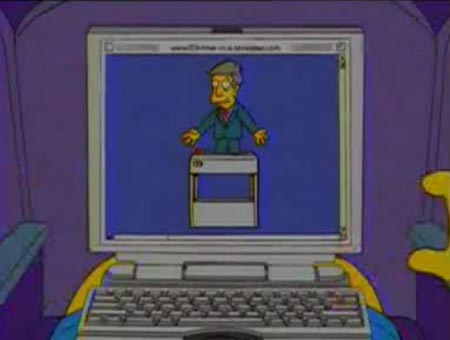 Ah yes, all of Bart’s anti-Skinner websites. PrincipalSkinnerStinks.com, SkinnerSucks.org, and Skinner-In-A-Shredder.com are all owned by FOX but don’t lead anywhere — they don’t even redirect to the main Simpsons page or anything. All three were registered on August 30, 2002 — exactly seven months before they were mentioned in the episode “‘Scuse Me While I Miss the Sky.”

As for ShavedSkinner.edu… well, unless someone founds an accredited college called the University of Shaved Skinner, it’s doubtful that domain will ever exist. 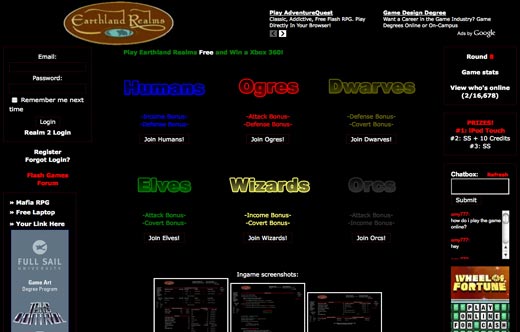 This site is from the episode “Marge Gamer”, where Marge signs up for an EverQuest/World of Warcraft-type game to bond with Bart.

It appears someone took this pretty far — and actually bought the domain and created a version of the game. I would play it but my eyes immediately gloss over when someone tells me to choose between being an elf or an orc. My brain is so full of useless garbage at this point, I just can’t find room for weighing and assessing the strengths and weaknesses of different mythical species.

This one is owned by FOX — I’m sure much to the chagrin of some niche fetish pornographer out there. Anyway, they took down the corresponding site for whatever reason, but the old Archive.org page let me pull up that screenshot.

Sadly, the Skinner domains and this one aren’t the only domains that FOX bought, used, and then took down. Other Simpsons domains that currently bring up errors or domain parking pages include StupidFlanders.org, Dorks-Gone-Wild.com, Nuclear-Secrets.com, and LisaTheMovie.com. 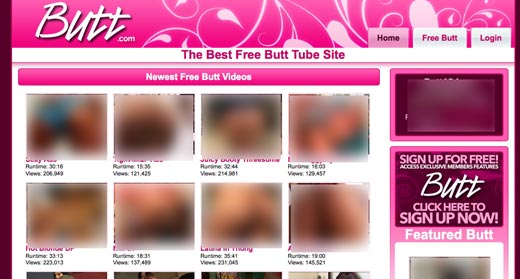 In the chalkboard gag for the episode where Homer becomes Alec Baldwin and Kim Basinger’s assistant, Bart writes “BUTT.COM IS NOT MY E-MAIL ADDRESS” over and over. 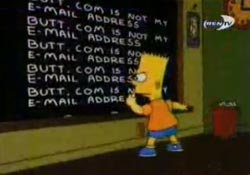 So, when this episode went into syndication, the animation was changed to read “BUTT.BUTT IS NOT MY E-MAIL ADDRESS”.

And that alternative is much cleaner because, thus far, the .butt Internet suffix hasn’t been claimed. We’re waiting on you, Bhutan.

9 | ZackAttack.com (warning – may send you into pop-up hell) 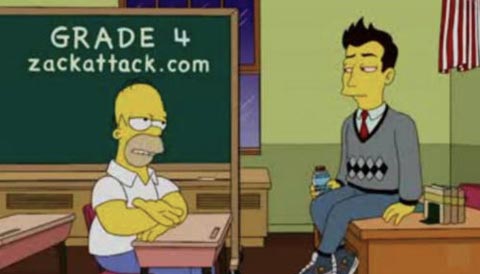 This is from the 2009 episode “Bart Gets a Z”, where Mrs. Krabappel gets fired and a hip teacher named Zachary Vaughn is hired in her place. During his parent-teacher conference with Homer, his website “zackattack.com” is prominently written on a chalkboard.

When I was researching this list, I’d forgotten all about that episode — basically most of the last five seasons or so run together in my mind. But I was more surprised that ZackAttack.com hadn’t been snatched up years ago by a Saved by the Bell fan. I guess Brian Fate would probably file an intellectual property claim.

Anyway, this domain was snatched up long before it was featured on The Simpsons — it’s owned by some German guy and now is a total spam site. 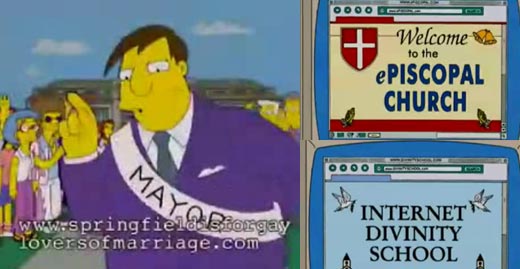 All three of these are featured in the gay marriage episode, and each leads to a different place. The SpringfieldIsForGayLoversOfMarriage one, sadly, is yet another site that FOX bought, created and abandoned. (Also, I love that they made is “For Gay Lovers Of Marriage” and not “For Lovers Of Gay Marriage.” A subtle touch on just how much the town didn’t quite “get” the gay marriage thing.)

ePiscopal.com is just broken; the official website of the Episcopal Church is episcopalchurch.org, and they aren’t the owners of ePiscopal.com. (I also checked and, sadly, Joe Piscopo doesn’t own ePiscopo either. Bad day for Team “Episcop” on their domain foresight.)

And DivinitySchool.com is a mix between a parked domain and an actual site — it’s not really providing a real service but kind of looks like a real website and had a ton of links to different online schools.

Not a strong showing for the websites of the gay marriage episode. Which, by the way, I just re-watched and really enjoyed. 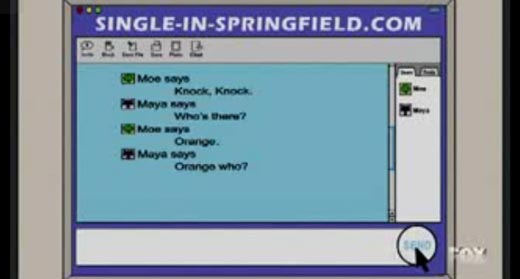 It was an incredible adventure. It required me finding a URL featured in an obscure 2009 episode. But I found one that no one owned.

This URL was featured in the little-known April 2009 episode “Eeny Teeny Maya Moe”, where Moe the Bartender meets a woman on an online dating site but she turns out to be a dwarf. Really. There’s an episode about that. I didn’t remember it either.