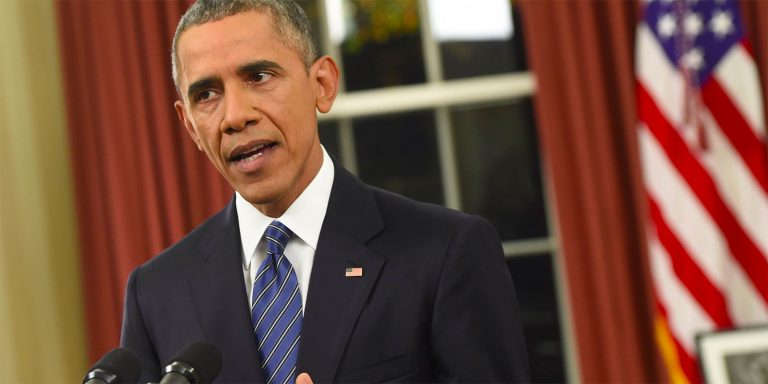 A newspaper in North Carolina had to clarify some confusion about Obama and the Antichrist.

Yes, it’s only February; no, I don’t think it’s premature to declare this the winner for best newspaper correction of the year.

I’m that confident this will hold up. 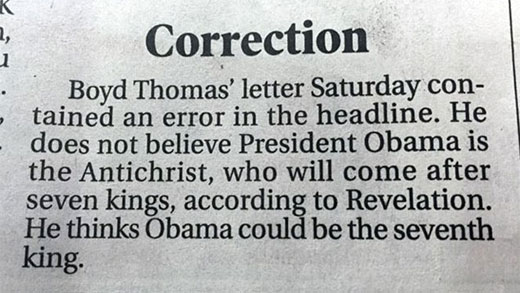 This newspaper correction comes to us from the Lexington (NC) Dispatch, a real newspaper from a real place owned by a real media group. Some back story…

On February 7th, the Dispatch published a letter to the editor from a man named Boyd Thomas. He wrote:

God states that seven kings must come before the rise of the Antichrist. Revelations 17:10 says the seventh king will reign for a short amount of time. Is Barack Obama the seventh king?

Obama has passed laws to kill more innocent people than anyone in the past … Obama’s laws are on abortion and medication allow children to kill children and kill millions of children yearly with our tax dollars … Does Obama already know Iran’s actions and is helping Iran? … States also have no-go zones of Islamists teaching their followers how to attack people. Obama believes this is their religious right … Obama has done nothing to help anyone unless it helps him hurt other people.

Obama claims nobody can stop him or change anything he’s done. This evil must come to pass before the Lord’s return and the rise of the Antichrist.

Some really bold points there, especially that part about allowing children to kill children. Is he suggesting Obama is encouraging a large number of Doogie Howsers to graduate medical schools as feeders for America’s abortion clinics? Discuss.

Anyway, the whole thing ran with the headline: “Is Obama the Antichrist?” So the Dispatch issued the correction because, in a twisted logic sort of way, a factual error about wild rhetoric is a correctable mistake, while publishing said wild rhetoric is not.

It’s sort of poetic in a way.

For more good newspaper corrections, I once did this list on unnecessary corrections.

11 Parodies I Made of the Obama Hope Poster