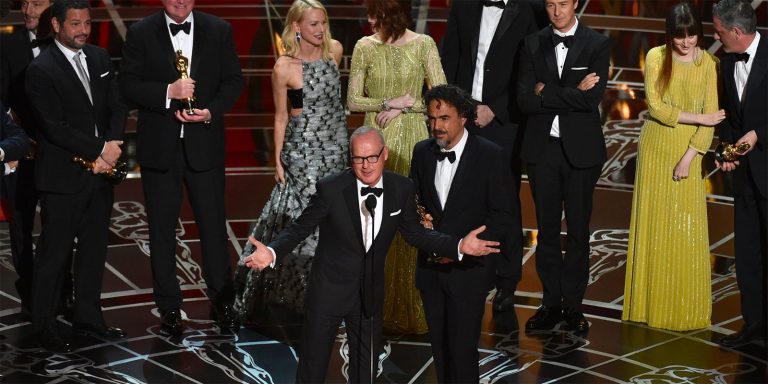 In the wake of the Oscars this year, like every year, people have called for the broadcast to be fixed. I thought that too, until watching it concurrently with a WWE pay-per-view cleared things up.

Every year, after the Oscars, there’s the ritualistic flood of conversation on what can be done to fix the Oscars. (The broadcast itself, not the awards process — although that could use a bit of work too.) Columnists lament the bloat. Loud voices on Facebook and Twitter beg for it to be shortened. Reactionary posts to ratings (the Oscars can barely beat a popular cable show) validate those points. The Oscars must be saved!

And I finally realized it on Sunday night as I watched the Oscars and a WWE pay-per-view simultaneously.

I’ve been a pro wrestling fan for most of my life. I watched in the late ’80s and early ’90s. I took a break (a convergence of “cool” tween life and a WWF creative dry spell) in the mid ’90s. I came roaring back in the late ’90s and early ’00s. I stopped again throughout most of the ’00s. Then slowly, I started watching a little in the ’10s — and fell all the way back in. I’m a wrestling guy at my core and I’m always going to come back. I am a die-hard fan.

But the WWE is going through another one of its creative down periods right now. All sorts of things are going wrong: Too much TV time leads to overexposure of the wrestlers; the wrestlers (who mostly aren’t actors) are way too scripted when they talk; WWE hasn’t built up enough new top stars and increasingly leans on nostalgia; wrestlers who become organically popular with the crowd are systematically passed over for less popular wrestlers that management is blindly enamored of; basic pro wrestling storytelling fundamentals have been all but abandoned.

The biggest problem by far, though, is the WWE’s irreconcilably split audience. Sometime in the late ’00s, the WWE realized there was good money in marketing to kids and families. They dropped from TV-14 to TV-PG (this also coincided with Linda McMahon’s run for Senate). They started marketing more toys, more bright colors, more cartoon tie-ins.

The WWE of today tries to cater, at least somewhat, to both the kids and the die-hards — and, in the process, fails at pleasing either group. For the die-hards, there’s a talented wrestler who comes out, speaks in a way that doesn’t feel too scripted or filled with horrible puns or Looney Tunes references, and puts on a crisp, inspired wrestling match that tells a story. For the kids, the WWE has a little person who runs around in a bull costume goring wrestlers. The kids have John Cena, WWE’s number one star, larger than life, who comes out, makes poopy jokes and always overcomes insurmountable odds to win his matches. In every arena, you hear the divide. The high-pitched kid voices chanting, “Let’s go Cena,” followed by the deeper adult male voices responding, “Cena sucks.” That happens on every single WWE show, every single week, and has for at least the five years since I’ve been watching again. It’s really a metaphor for the product. The WWE’s programming is, essentially, “Let’s go Cena” versus “Cena sucks.” At the end of three hours and 10 minutes (yes, Monday Night Raw is three hours and 10 minutes) of that tug-of-war, no one’s particularly happy or satisfied.

So what does this have to do with the Oscars?

On Sunday night, I had two windows open on my computer: the Oscars in one, WWE’s February pay-per-view (now called Fastlane) in the other. Usually the WWE schedules around major events to avoid this scenario, but on Sunday, they were on the same night. And watching them concurrently, it finally clicked that they were sending me the exact same message.

This isn’t for you.

They’re made to be a celebration of excess in every way, and that excess includes the excessive length of the broadcast. It’s why you couldn’t just hand out the acting awards and Best Picture and call it a night after 90 minutes. Neil Patrick Harris had the crowd applaud American Sniper‘s box office numbers. He waited for people to clap when he talked about how it had made $300 million. He celebrated the whopping value of the gift bags the nominees received. Hundreds of stars walked down the red carpet in gowns that cost tens of thousands of dollars, wearing borrowed jewelry worth seven figures. The musical numbers were blowout extravaganzas. Even the various political statements made by winners are part of the excess — the whole world is listening!

And the Oscars are for the people who love that excess and pageantry, whether proudly or secretly. The people who love that glimpse into Hollywood. The people who live vicariously through seeing glamour, talent, fame and recognition meet in a way regular life never provides. And those people are out there. I suspect they’re the people who drive NCIS to its weekly ratings bonanza and who ask celebrities for retweets on their birthdays — but they’re out there. 36.6 million people in the U.S. watched the Oscars. Down from last year; still a ton of people, especially in today’s fragmented market.

The Oscars are for them.

By the end of the evening, the Oscars left me bored and the WWE left me frustrated.

The Oscars were the same old, same old. Sure, a few things happened (John Travolta did something creepy! Lupita Nyong’o called the Oscar the wrong name! Some random guy refused to let the band play him off!) but nothing really happened. It was a super bloated show where, more or less, the favorites won. Bad jokes were made, songs were sung, I won’t remember any of it in two weeks.

Over at WWE Fastlane, the wrestler beloved by the die-hards lost to the exponentially less popular and talented but much taller and more muscular wrestler who’s been deemed by the WWE higher-ups as the next big thing. Boredom will ensue. Lots of other matches ended in unsatisfying or unimaginative ways. WWE is building toward its biggest event of the year, WrestleMania, and nothing looks particularly new or exciting or entertaining to me.

Both of my reactions are subsets of the bigger picture. Neither event is catered to me. I attended the Oscars two years ago and loved it — but sitting at home and watching, I’m not swept away by the grandeur. I subscribe to the WWE Network, but I’m not the set of eyeballs the WWE is craving. I won’t buy a John Cena t-shirt or a ticket to a live event. I won’t sit through a slogging episode of Raw. I can enjoy watching both the Oscars and the WWE, I just have to shift my expectations on both to enjoy them for what they are — not what I hope/wish/think they could or should be.

It’s not the responsibility of the Oscars or the WWE to cater to me. Their job is to put out the best product they can for the audience they target that most accurately represents what they want to be as a brand. Both the Oscars and WWE did that on Sunday night. And in spite of declining ratings, both will continue to do that. Neither will be “fixed” because neither is looking to be fixed (and neither is at risk of disappearing anytime soon). They’re just staying the course until old fans wash out, new fans buy in and tastes cycle back into their favor.

It’ll happen. Always has. The only revolution they’re waiting on is time.