Canada gave their top honor to a book called Bear in 1976. It’s fascinating.

Sometimes, you just have to lean in and embrace who you are. (I’m referring to Canada and its stereotypes, not a woman leaning into and embracing a bear, by the way. Let’s pace ourselves.)

In 1976, a Canadian author named Marian Engle wrote a novel called Bear. And it developed an infamous reputation, at least in Canada, because of the one-sentence wrap up of its plot: Woman falls in love, and has sex with, a bear.

Canadian literature has a reputation for focusing, almost too much, on rural life and the struggle between humans and nature. But no mainstream book had ever taken it to the place Bear took it. (And, I’ll hazard a guess, no mainstream Canadian book has done so since.) 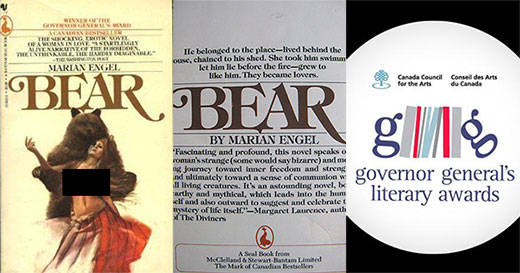 Bear is the story of a librarian in her mid 20s named Lou, who relocates to a small island in northern Ontario for several months to work at a library. Life is lonely until Lou encounters a big, brown bear. They form a bond, which one day turns sexual when they’re cuddling in front of a fire.

The bear and Lou have some sexual contact, including his use of his “moley tongue.” But when Lou wants to have sex with him, it’s not meant to be, as “his prick [doesn’t come] out of his long cartilaginous sheath.” Lou develops deep emotional feelings for the bear, which go unreciprocated because, you know, he’s a bear. At one point she even pours honey on herself to try to get him to stay with her, but once he licks it off, he “wander[s] off, farting and too soon satisfied.”

As she’s wrapping up her work at the library, she and the bear give it one more go, and he scratches her deeply in the back. That ends their relationship, giving her a permanent physical scar to match her emotional ones, as she returns to Toronto changed and oddly renewed.

And now, the twist.

Engel won the 1976 Governor General’s Literary Jury award for Bear, which is like their Pulitzer Prize.

Why? Engel was a respected author. The book got so much Canadian notoriety it couldn’t be ignored. It was thought to be well-written (don’t let the out of context pull quotes above fool you, I guess). Most critics took the entire woman-bear relationship as a metaphor for frustrating and unrequited love; Engel was going through a divorce when she wrote it. And, for better or worse, it used all of the classic elements of Canadian literature in a shocking, fresh and intentionally beguiling way.

Or maybe they were all just liquored up and thought it would be hilarious to give it an award so that people would, for decades to come, gradually find out about the book and the award and have to dig deep into Canadian literary culture to try to make sense of it.

If so, well played, because I fell right into your trap, you moley tongued devils.