Why humans and pigs are at the same spot on the food chain. Education from Bovine University not required.

Twenty years and three weeks ago, The Simpsons premiered an episode called “Lisa the Vegetarian,” where Lisa decided to give up meat — a decision the show has stuck with it ever since. The episode is an all-time classic and features dozens of lines that are repeatedly quoted both online (boo) and by me (yay?).

One of the highlights of the episode is an educational movie (provided by the meat industry) shown in the school after Lisa begins denouncing meat. And for a brief moment in that film, this image of the food chain flashes on screen… 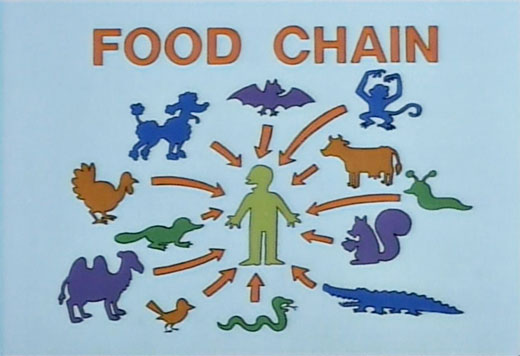 It’s a great sight gag, especially since it so accurately sums up what humans believe. We are the top of the food chain. We eat every animal and they don’t (or, thanks to our weapons, can’t) eat us.

Turns out that’s not quite corrected — because that’s not the way the food chain is measured.

The food chain is based on a ranking living things from one to five based on the percentage of other living things in their diet and the number of predators trying to eat them. A one is a plant, a five is an animal (called an apex predator) that only eats meat and has no or very few predators. All of the others fall in between. As omnivores, humans are part of the “others” group.

According to a study out of France, humans score a 2.21 out of five on the scale — which makes us roughly equivalent to pigs and anchovies in the food chain.

What animals are on top? Tigers, crocodiles, and boa constrictors.

There’s more. You can also break down where the humans in different countries rank on the food chain, based on their ratios of plants to meat consumption. Burundi is the lowest, at 2.04. Other developing countries, like Indonesia, Bangladesh, and Nigeria, are also below a 2.1. The U.S. is on the higher end, at around a 2.4. And the highest country on the food chain? Iceland, with a 2.54.

Conclusion (not really, but has to be said): You don’t make friends with salad.