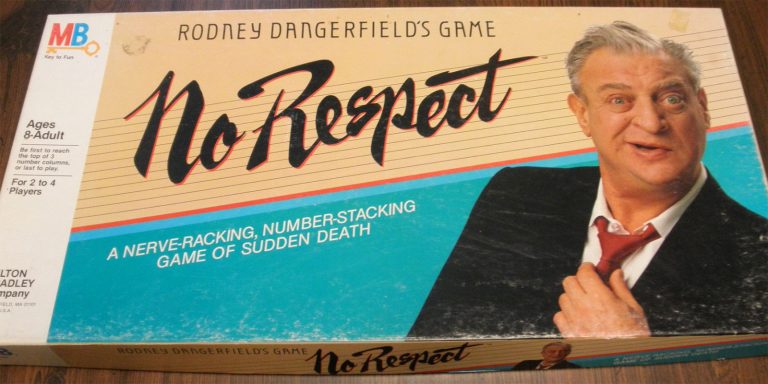 They turned everything into board games in the ’80s. Everything.

Hey look, it’s the long-awaited follow-up to my September 2016 post on 11 ’90s Pop Culture Board Games That Didn’t Need to Exist. Well, “long-awaited” might be a stretch. More like “idea that was sitting on my ideas list but kept getting bumped for other things and no one ever really asked about.” But still. It now exists.

Once upon a time, toy companies turned every pop culture phenomenon, big or small, into a board game. It’s a sharp contrast to today when someone on Kickstarter turns every idea period into a board game. (Including me, in a recent past life.)

Here are 11 of those random pop culture board games from the ’80s that really didn’t need to be made.

Look, I’m a Rodney Dangerfield fan. Back to School? Overacting in Caddyshack? Larry Burns? Chef’s kiss to all of them. But he didn’t need a game totally unrelated to him. You’d think a game about his “no respect” catchphrase would include some kind of situation where players would screw each other over. Nope. This is just an unsophisticated number stacking game. That being said, it’s got great back-of-the-box art — art that seems to imply gameplay hinges on doing Rodney Dangerfield impressions. (Sadly, it does not.)

It’s hard to explain this to younger people, but in the ’80s and ’90s, most of our cultural catchphrases came from commercials. We couldn’t fast forward through them and we all watched the same TV shows, so they became fairly resonant universal touch points. “Where’s the beef?” from a Wendy’s commercial was one of the most famous ones of all. Which is why it earned not one but *two* games. The goal of both of which is, as you might guess, attaining beef.

This game, which looks simplistic even by ’80s cash grab standards (that board design isn’t even at Chutes and Ladders-level complexity), was not based on Mr. T’s persona from The A-Team. Rather, it was based on a short-lived cartoon where Mr. T coached a gymnastics team that also fought crime. Yes, really.

The goal of this game is to wrangle the whole Keaton family to take a photo together, and to amass $100 to pay the photographer. Not exactly up there with RISK in terms of stakes, but kind of like a very, very stripped down Monopoly. (Although the equivalent of going to jail is drawing a card with the Keatons’ neighbor Skippy, which is a decent touch.)

Of all the pop culture fads from my childhood, the California Raisins might be the hardest to explain. “So they were these Claymation advertising mascots but weren’t really in commercials, and they were good singers and for some reason they had every possible merchandise spin-off even though no one really felt strongly about them one way or another.”

When getting $10 for winning second place in a beauty contest isn’t enough for you.

I hope board game manufacturers have learned a valuable lesson about the downside of helping frauds aggrandize their mythology. Then again, at least it was an accurate Trump simulation: The entire point of the game was buying properties at inflated prices with imaginary money.

What a missed opportunity for Duran Duran to recreate Hungry Hungry Hippos with wolves.

I Created a Card Game! And It (Nerve-Rackingly) Just Went Live on Kickstarter