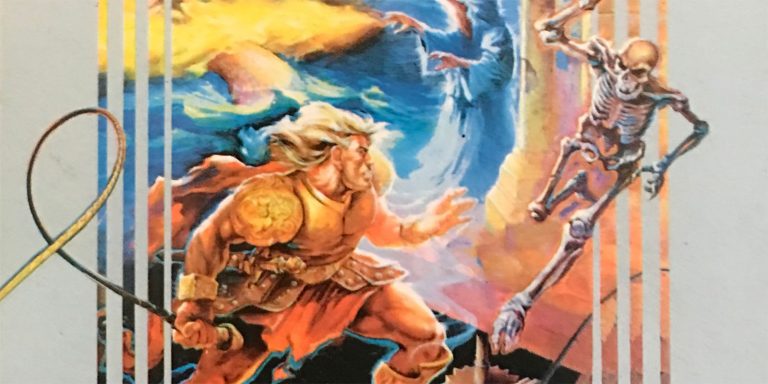 Nintendo has a history of aggressive censorship, but occasionally some 8-bit nudity slipped past their watchful eye.

Sure, since even the Atari days, people have integrated sex into video games (games like Custer’s Revenge and Burning Desire featured blocky characters doin’ it). The Leisure Suit Larry games took double entendres to a level that would make a Three’s Company writer say, “Whoa, slow down.” And in today’s modern video games, kids can take a quick break from committing grand theft auto to rape a prostitute, so that’s cool.

But while sex has found a smooth integration with video games… nudity has not. My theory: Older video games were too pixelated and/or cartoonish to be sexy… and any nudity in modern video games would hit the uncanny valley. (They even discussed that on an old episode of 30 Rock.)

Yet that hasn’t stopped anyone from trying.

Here are the finest 11 nude moments from old school NES games. In theory, this list might be not safe for work… though these screenshots are about 500 miles away from actual nudity.

Long before the sixth sense was associated with Mischa Barton vomiting brown milk onto Bruce Willis the Friendly Ghost, it was the subtitle of an aggressively mediocre Nintendo game.

Taboo: The Sixth Sense was a tarot reading “game” for NES. There wasn’t any action or gameplay or anything; it would just give you a quick, generic tarot card reading. No one would ever have spoken about it again, if not for the nudity.

Taboo has the distinction of having the most blatant nudity of any game that was given the “Nintendo Seal of Approval” by the higher-ups. (More on their aggressive censorship policies to come in this list.) One of the tarot cards featured a back view of a nude man and woman.

And another tarot card featured, from what I can see below, a very pixelated view of the chick from Total Recall.

Nintendo has, historically, worked its little Pacific Northwestian ass off to be a catcher in the rye for American video gamers. With Castlevania III: Dracula’s Curse, they took nudity out of the Japanese and European versions of the game before it could hit the U.S. market.

Above are two side-by-side comparisons (via GamesRadar) comparing the overseas and U.S. versions of Castlevania III.

In the first one, you can see they decided to give Medusa a mastectomy… turning her into a buff, snake-haired pink man. And in the second one, they decided a topless statue wasn’t artistic enough to remain that way, so they covered her up. I guess if you’re gonna censor Itchy and Scratchy you’ve got to censor her too.

While Castlevania III got the full-on censorship treatment, a few years earlier, Kid Icarus managed to slip almost the same thing past the watchdogs.

Above is a screenshot from Kid Icarus where a few topless Venus de Milos (not the gummi version) managed to make the final cut.

I’ve also included an even more scandalous piece of Kid Icarus nudity — in the instruction manual, where they list the various enemies in the game, there’s a blatantly bare-breasted cartoon of a character called “Syren.” Sure, her bare breasts are blue, but that doesn’t make them any less sexualized. (I mean, let’s be honest: When you were watching Avatar, you kinda hoped James Cameron would give you full-frontal on one of his blue giantesses, right?)

I never played this game, but, apparently, in the opening sequence, you take your marching orders while getting your Porky Pig on. One could argue that those are supposed to be khakis, but that’s so much less fun.

Another case where, somehow, total nudity managed to elude the higher-ups at Nintendo. Here, when you pop into the sauna, they show you toweling off, totally nude, from behind.

I would’ve given Technos, the makers of this game, eternal credit if they’d managed to also slip a glory hole into this scene at Pop’s Health Club. Missed opportunity, company that went out of business 14 years ago!

You know it’s a monster party — and not a nice, regular party — when you’ve got to fight a pair of legs with either (1) an 8-bit vagina (2) an 8-bit anus or (3) Ken-like genitalia. (I can’t tell. Don’t be ashamed to stare deeply and try to analyze what’s goin’ on down there yourself.)

Continuing with Disney’s long history of allegedly slipping dirtiness into their products, here’s a scene from the ending of their Little Mermaid NES game.

It’s hard to tell exactly how much of Arial’s brand-new human buttocks are being shown here — it very well may be just a trace amount — but since it’s Disney, we’ll assume it’s a decent amount.

First up is Hot Slots, which appears to have been a painfully boring slot machine game. The cut scenes then show women in various states of undress making many, many sexual puns. (Did you know that a vagina can be referred to as a “slot”? ‘Cause this game is gonna punch you in the face with that particular slice of uninspired wordplay.)

Of all the games, the nudity seems the most graphic; in fact, below, I decided to include a non-nude cut screen, because many of the other ones out there really did seem too dirty to use.

Peek-A-Boo Poker is more of the same — some weak casino game action spliced in with some predictable 8-bit erotica. I like how they tried to turn the word “poker” into a sexual innuendo by naming a character “Pok-Er Penny.” That makes a lot more sense than Double Dealing Debbie. Are they saying she’s got large breasts, or she’s into threesomes and/or adultery?

And finally, there’s Bubble Bath Babes, which is kinda like Tetris… but with more awkwardly-shaped pieces and a nude woman sitting at the bottom of your tub. At least she wasn’t modeled after any of those questionable, questionable women from the box cover.

(This also made me flashback to a game that got rampantly passed around when I was in college — a Tetris knock-off where you had to match nude male and female “pieces” up in sexual positions. I gave up on the game because, as a Tetris and Dr. Mario aficionado, I felt the play control on Sextris was spotty at best.)

Maniac Mansion is famous for the amount of censorship it incurred — including, at one point, Nintendo objecting to an arcade game called Kill Thrill in the background of one scene, so the developers passive-aggressively changing the title to Tuna Diver.

Above is a pre-censoring screenshot of a nude female statue from the game.

I guess this would be a good chance to address a sub-thesis of this list: Pretty much none of this NES nudity is even remotely stimulating.

I’m not saying that nudity should’ve stayed in these censored game because it’s harmless; I’m saying that it shouldn’t have been included in the first place because it’s pointless. (Other than, decades later, giving me fodder for an 11 Points list. Which I really do appreciate.)

10 | The Magic of Scheherazade

These NES breasts are scary, red and look like they’d be rock hard in a bad way… but, sad to say, I’ve actually seen even worse breasts than these. In person. Recently. (I was at the Clermont Lounge in Atlanta last week. If you’ve ever been, you know exactly what I’m getting at.)

Unless while it’s happening someone’s singing the remix to Ignition.

11 Awkward Moments With Swastikas and Hitler In Video Games