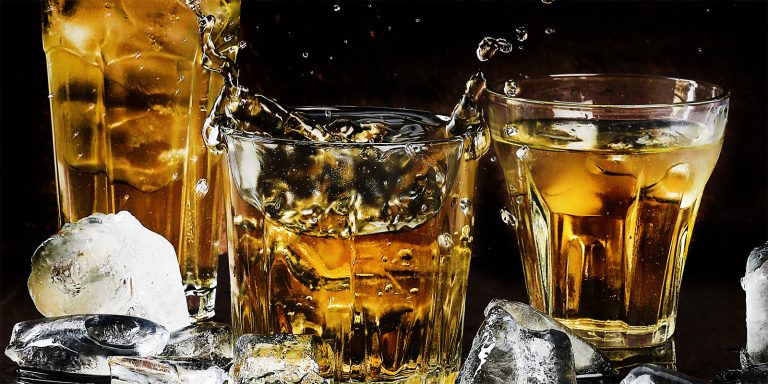 Beyond just Manhattans, we get into some hardcore drinks that’ll put hair on your chest — and hopefully not make you go blind.

This list has been done on the Internet before… but never with the strange, unexpected, what-the-hell-goes-on-in-Sam’s-brain approach of 11 Points.

James Bond fooled people into thinking martinis are manly. They’re not. And it’s not even because martini glasses are shaped like some cross between a fertility symbol and women’s underwear.

It’s the olives. Having an olive in your drink is, at best, contrived and, at worst, downright ladylike.

Which is why if you need to drink (basically) straight vodka out of a martini glass, order a gibson and be a man. Because it eschews an olive for an onion. And eating a vodka-soaked raw onion is manly.

(Beer with a shot of whiskey or rum dropped in)
I feel like this is what steveadores order when they go to bars after a long day of moving around giant shipping containers. And they’re uber-manly.

I learned this from season two of The Wire. [Insert The Wire was criminally underappreciated rant here.]

I wrote about my experience with a buffalo sweat about a year ago, in my list 11 Posters From My College Days That They Still Sell Now (the buffalo sweat was depicted on a “shooters” poster I used to have). Now, in a meta moment, I will quote from my own website.

[W]e had this poster my sophomore year, and, one night, endeavored to try some of the more adventurous shots listed. This ended up with myself and my friend Jake attempting to do a “Buffalo Sweat” shot. What that is? Three parts bourbon, one part Tabasco sauce.

I took the shot, proceeded to have it come right back up (into a waiting garbage can), then found myself drinking an entire 20-ounce bottle of Wild Cherry Pepsi in one sip. (Ten years later, these details are still very, very vivid.) Since that day, I have not been able to eat Tabasco sauce. An entire decade, Tabasco-free.

Well, it’s a year later and I am now 11 years, Tabasco-free. But from that day on, I had hair on my chest.

Even the powdered sugar can’t de-manify this drink. I’m pretty sure it’s there just to prevent this from being the worst tasting drink in the history of the world. (After all, Mountain Dew Baja Blast already has that award sewn up.)

You know it’s a hardcore drink when 101-proof WT is the LESS potent ingredient.

Wow. This one makes me sound like a real ‘gina for projectile vomiting from the aforementioned Buffalo Sweat.

Wait a second… shit… this is a traditional one. My bad. Let’s counteract this moment of predictability with the craziest entry of the list…

According to this article, the Maasai, a nomadic indigenous group in Kenya and Tanzania, drink a distilled liquor (called enpinyo)… and chase it with fresh cow’s blood.

The reason: The cow’s blood is good for preventing a hangover. (How much are their minds going to be blown if a few missionaries head over there and bring along a case of Chaser tablets. “So… um… you mean we didn’t need to pound cow’s blood for all these generations? Oh, man… weak.”)

But, until that day arrives, homemade alcohol mixed with cow’s blood remains just about the manliest way to get drunk ever.

(a minimum of three X’s)

It’s one step up from drinking antifreeze.

Manliness bonus points if you drink your moonshine out of a brown jug with X’s handwritten on it in coal.

What could be manlier than saying, “I’m such a man that I can drink another race’s official man drink”???

Imagine you’re at a bar. Everyone else is ordering from the waitress. “Bud Light.” “Gin and tonic.” “Do you have Pinot Noir? Great!” “Yeah, shawty, I’ll take a Johnnie Walker Blue.”

Then it’s your turn.

Does anyone EVER question your manliness again? I rest my case.