The Simpsons episode “Lisa’s Wedding” was made in 1995 but set in 2010. Here are the predictions they made about this year that they got right.

So yesterday, Lisa Simpson got married. 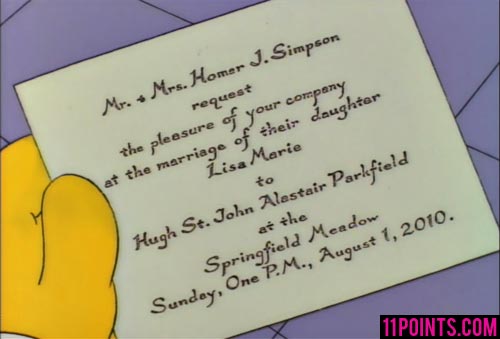 That invitation is from the classic Simpsons episode called “Lisa’s Wedding”… which was the show’s first (of three) episodes to feature a vision of the future. (And also, six seasons in, the first Lisa-centric episode to come anywhere close to “classic” status.)

In the tradition of the two lists I did last year discussing Back to the Future Part II — its good predictions and bad predictions — I decided to look at the vision from The Simpsons of what 2010 would look like. 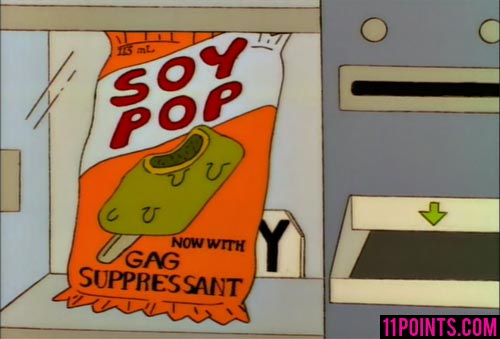 30 Rock did an entire subplot around buying a SoyJoy out of a vending machine. I’d say the idea of soy-based snacks has definitely come to pass. And The Simpsons also accurately nailed their horrible, horrible flavor. Even a generation that grew up eating paste as children can’t really choke them down.

2 | More and more celebrities getting arrested 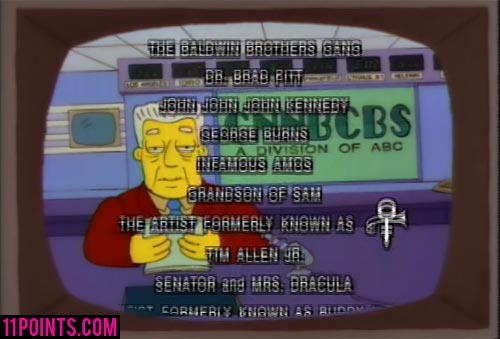 During Kent Brockman’s newscast, he lets viewers know that if they see any celebrities, consider them dangerous. A few years later The Simpsons would have an entire episode centered around Mel Gibson. In 2010, they’d take Brockman’s advice and stay the hell away. Celebrities really do get arrested at a prodigious rate today. 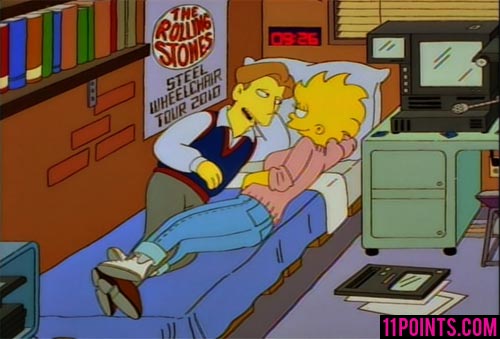 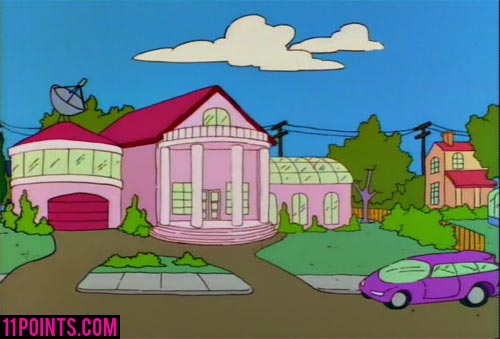 Throughout “Lisa’s Wedding”, pretty much every home and building shown has a small satellite dish on top. And while not all of us have satellite cable, this episode was written around the same time that DirecTV was founded. (Both in 1994.) A decade and a half later we don’t all have small satellites on our roofs… but many people do, and we all, at least, have the option. (And, just like The Simpsons predicted, they’re an unexpected eyesore.) 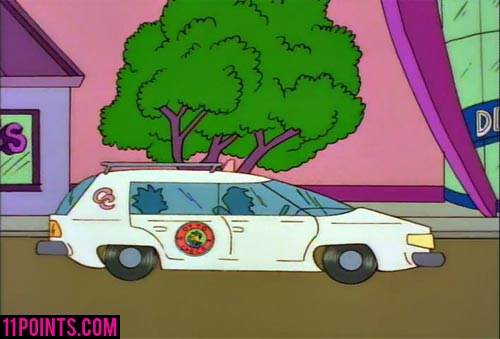 This cab, driven by the indicted Mayor Quimby, looks surprisingly like the Prius design. And/or they modeled it after the Inspector Gadget car. Honestly, it’s right smack in the middle of those two designs. 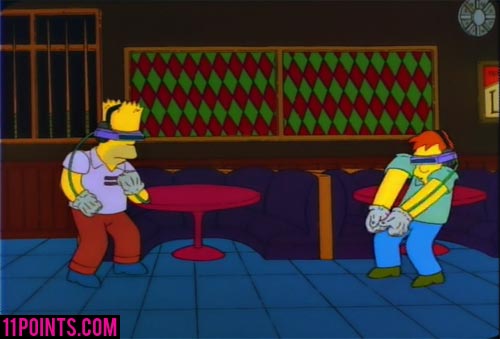 You probably don’t recognize this scene. I didn’t. It was cut out for syndication… meaning we saw it when Fox first aired the episode, then didn’t see it the subsequent 200 times we watched the episode, and now have it back on the DVD.

The syndicators do a so-so job on choosing which scenes to chop out of The Simpsons episodes to make room for one more precious commercial. This was a good chop. The scene is kind of dumb — Bart and a random guy wear virtual reality headsets and play motion-controlled video games.

And while it’s not exactly the Wii or the Kinect or the PlayStation we’re-so-late-to-this-motion-controlled-party-that-the-kegs-are-tapped-and-the-hosts-are-in-pajamas… and the headsets more resemble Nintendo’s ill-fated Virtual Boy… we are in the era of motion-controlled video games. So I’m giving them a “pretty damn enough.” 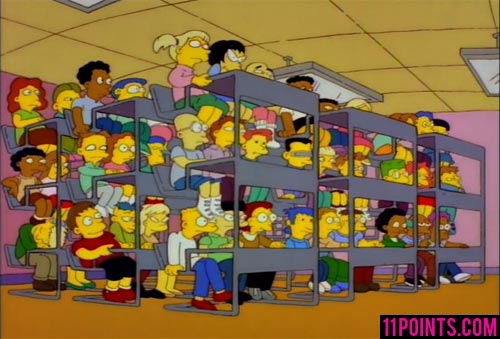 I’m pretty sure this is what classrooms look like here in California. Well, just with a spicier Latin flavor. 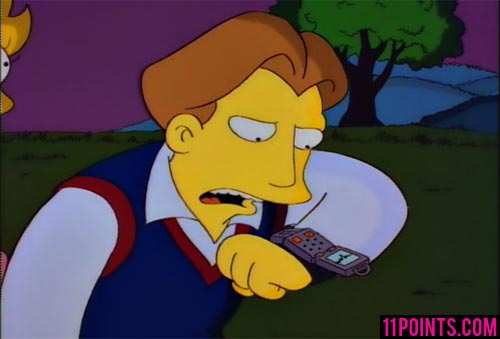 I’m not sure why People Of The Past were so obsessed with wristwatch communication. Dick Tracy built his entire career around it… and here Hugh uses it for his crucial wedding proposal. Once wrist communication actually became possible, we realized it was NOT going to revolutionize the world as we know it.

Yes, this technology exists today — mostly as toy walkie talkies or through Bluetooth from your cell phone. I think they sell both in SkyMall. And I assure you, anything sold in SkyMall is not a cutting edge or indispensable technology.

9 | A device resembling the Kindle 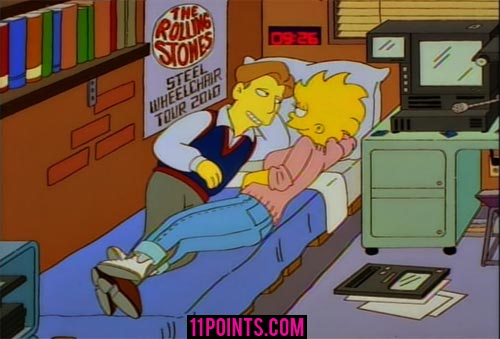 The device on Lisa’s dorm room floor here (or is it Hugh’s?) looks a bit like the Kindle. Or, at the very least, a slightly larger Apple Newton. The PDA, not the cookie. PDA meaning personal digital assistant, not public display of affection. Why do things always have to mean other things? 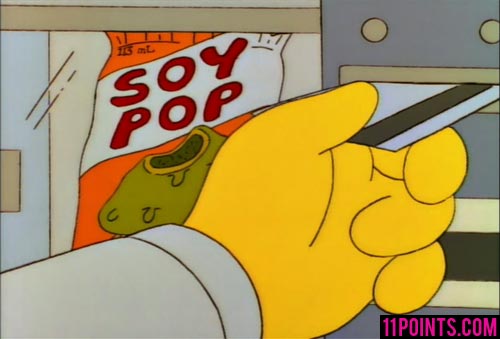 They nailed this one perfectly. 2010 is the time when we’ll happily jam our credit cards into anything — we haven’t quite gotten to widespread wireless/thumbprint/RFID payments yet, but we sure as hell aren’t going to carry around a bunch of cash anymore. We’re not cavemen after all. 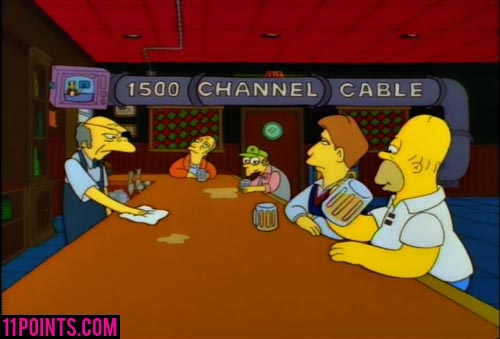 Coming soon — the 11 Predictions About 2010 The Simpsons Got Wrong.