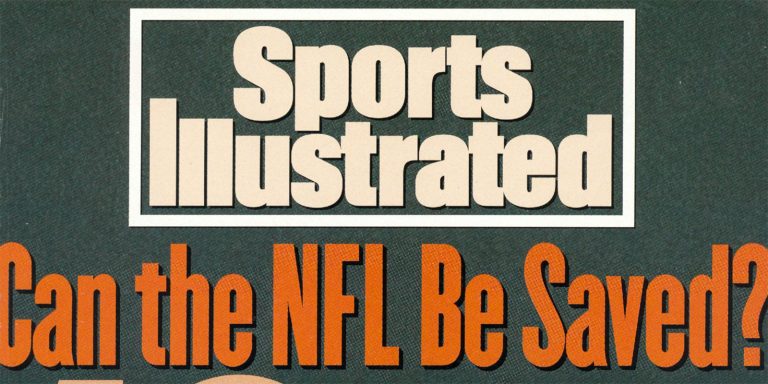 In the ’90s, Sports Illustrated predicted the end of the Yankees, the NFL and the Browns’ worries.

Back in May, I wrote about 11 Splendidly Bad Sports Illustrated Predictions from the ’80s. Today, I have the follow-up. I looked through every SI cover from the ’90s to see some of the not-so-strong predictions they made the following decade.

Here they are, in chronological order… 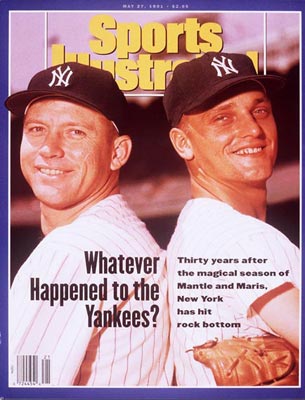 In 1991, it was arguably OK to write articles about the demise of the Yankees. As for them hitting rock bottom… well, within a few years, no one would ever, ever write another article about that again.

See, Mantle and Maris conjured up magic… but the modern Yankees realized that, for the mere price of $800 billion, you can create your own magic. (Dark, evil magic — but magic nonetheless. The Sorting Hat would totally put them in Slytherin.) 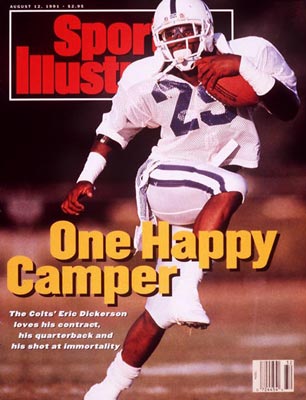 Dickerson had a great NFL career (and made the Hall of Fame). But this article came out in advance of the 1991 NFL season — and falls way, way short of its sensationalist hopes and dreams.

Eric Dickerson’s love of his contract and quarterback turned out to be fraudulent, as his insubordination got him a three-game suspension from the team. His “shot at immortality” went even worse… he rushed for fewer than 550 rushing yards and only two rushing touchdowns, the Colts went 1-15, and he was traded to the Raiders after the season. He’d retire a season and a half later after failing a physical during a trade.

If he wanted immortality, he really should’ve split his soul up into a bunch of horcruxes, anyway. 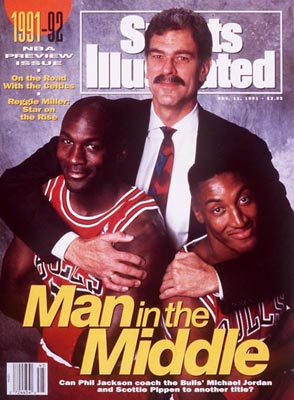 Ignoring how terrible of a question this cover posed in retrospect (yes, I do believe the Bulls found a way to win again) — this is a ridiculous time capsule into the NBA of almost 20 years ago. Can you imagine a magazine cover now where an NBA coach was hugging two players? Hugs don’t really fit in with the superstars’ “brands” anymore.

(On a tangent, there’s this episode of It’s Always Sunny in Philadelphia where Mac tries to do a spin kick to break the window of a locked car but ends up sloppily kicking off the rear-view mirror. Charlie tells him “if you love karate so much, just take ONE lesson.” Do you think anyone’s ever said to LeBron or his high school buddies “if you want to be a marketing geniuses so badly, just take ONE class”?) 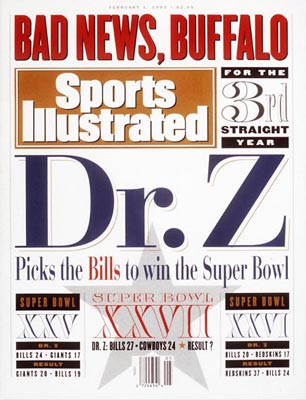 These three Super Bowl picks in the early ’90s put a scarlet letter on Dr. Z for the rest of his career. (To fit in with his brand, let’s say the letter was “Z”… standing, of course, for: “Zero percent chance I ever take one of this guy’s picks serious again. He’s putting me to sleep. Zzz. Triple word score.”)

Dr. Z picked the Bills to win three straight Super Bowls… and, as we all know, they (and, therefore, he) lost all three. By this third one, pictured to the right, even SI kinda knew they were printing a bad prediction… and a curse. (By the way, FINALLY, in Buffalo’s fourth straight Super Bowl appearance, he picked against them. Correctly. If the Bills had finally won that one Dr. Z would’ve been running for the razors.) 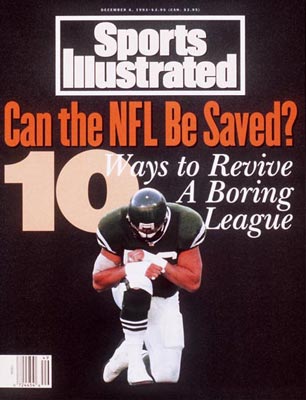 Just like the Yankees cover a few years earlier, the crystal ball at the Sports Illustrated office REALLY needed a tuning. Within a few years of this cover the NFL began its ascent and became, unquestionably, the biggest sport in the country. It’s remained there ever since.

This reminds me of the onslaught of articles in the Gamecube era that speculated that Nintendo was dead and should just follow Sega’s path into software only. A few years later, all of those people were using their Wii controller as a virtual tennis racket, sword, meat cleaver, paintbrush and umbrella. Never doubt a powerhouse’s ability to reclaim its crown. It’s why I keep going to see M. Night Shymalan movies. And having sex dreams about Sharon Stone. 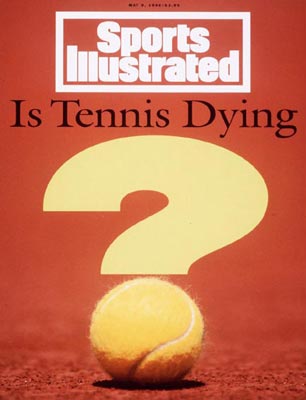 Less than six months after questioning the NFL’s viability, SI went ahead and questioned tennis’s, too. No, tennis couldn’t be killed, not even by a crazed German stabbing it in the back with a knife.

I roll my eyes at these types of covers because they’re such clear predecessors of the modern, ESPN style of sports journalism — aka say the craziest thing possible, as loudly as possible, and watch the Around the Horn appearances roll in. I can just imagine Woody Paige, Skip Bayless, Stephen A. Smith or any of the rest of ESPN’s goons reading this article in 1994 and saying, “Eureka!” (Or a word that one of them might actually know, like “Ooh!” or “Ah-ha!”) 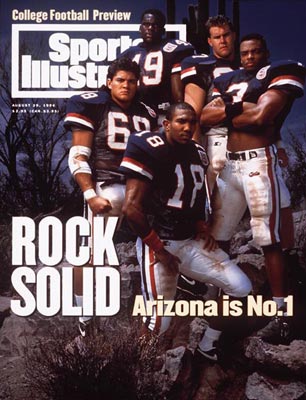 I remember when this issue came out. I was an SI subscriber at the time. I didn’t know that much about college football, but I knew this seemed like a weird, almost random pick.

And it was. SI was roundly mocked for the choice — and Arizona ended up going a decent (but not nearly #1-worthy) 8-4. They finished third in the Pac-10, lost in the Freedom Bowl to Utah, and wrapped up the year ranked 20th.

(It was eye-opening looking this info up, by the way. Remembering the era with the Big 8 Conference, the Bowl Coalition, fewer than 20 bowl games, Rashaan Salaam… and, strangest of all, a time when Miami was a powerhouse.) 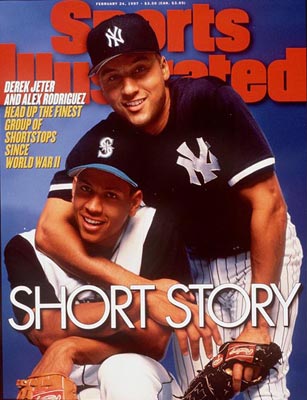 They WERE a pair of fine shortstops… until they became teammates, this hug turned into a choke, and the better one had to move to third base to stop the worst one from crying. 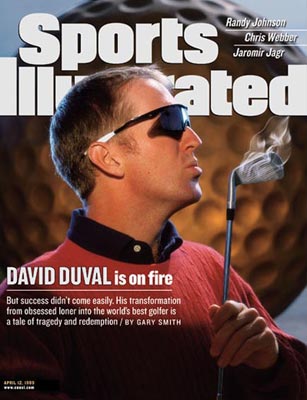 I mean… they printed this AFTER Tiger had arrived. David Duval was a very nice golfer but, like comparing Mortal Kombat to Donkey Kong, this seems like a dated and short-sighted pick. 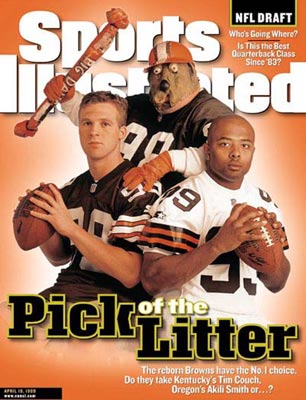 Ah yes, the good old Browns scouting team, trying to figure out which future Hall of Famer would be a better #1 pick, Tim Couch or Akili Smith. I love that SI and the Browns weren’t even considering Donovan McNabb. Says everything you need to know about the predictive abilities of both entities.

It’s a tough time to be a Cleveland fan. The best player on the Browns is a special teamer. The best player on the Indians came in a trade for Casey Blake — not for one of the two Cy Young award winners traded in their primes. The Cavs have a 40-42 record and just missing the lottery all over them. The dark ages are back. Sigh. 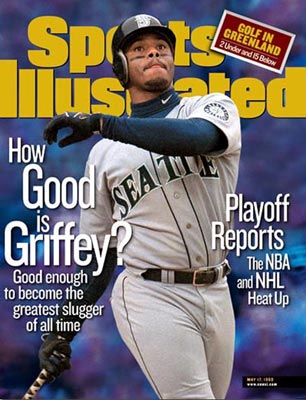 He very well might’ve had the stroke to be the best slugger ever. Unfortunately, it turned out he was made of glass. You know what would’ve toughened him up? Steroids. Instead of getting injured all the time during his career, he would’ve just lost the function in all of his organs and his testicles after his career.

I haven’t looked through the SI covers of the 2000s yet, but I’m sure the bad prediction machine made its way there too. I’ll dig those up eventually as well.