The creator of GhettoWine.com shares the darkest experiences in his trip down the rabbit hole of consuming incomprehensibly cheap booze.

I’ve devoted some space on this website to classy drinking (like my various posts with the sophisticates of 12 Bottle Bar or the guide to being an amateur wine snob). I’ve also devoted some space on this website to not-so-classy drinking (like 11 Cheapest Ways to Get Super, Super Drunk or 11 Things You Didn’t Know About Natural Light). This post is another salvo in the fight for the latter.

I recently e-met “Satan 165” (not his real name… probably), the proprietor of the website GhettoWine.com. We’ll get into how we came to meet each other toward the end of this list; for now, know that I was immediately fascinated by him. His passion is cheap, potent, sweet hobo wine — and he’s been running his website, amassing his unparalleled collection, and filming himself drinking entire bottles in under 10 minutes for almost a decade. I wanted to know more about his world.

Good ol’ Satan was kind enough to compile this list for us describing the 11 worst things he’s done in the name of his hobo wine passion. He made it clear that this isn’t only an anthology, it’s also a cautionary tale — and serves as advice of what NOT to do if you’re so inspired to start hoarding wine that isn’t a “red” or a “white” but rather a “neon green” or “unnatural brown.”

Here are the 11 worst things he’s done, with a few notes from me added on each one.

“When a family member dies, a time of mourning is customary. It is important in these difficult periods that the remaining family pulls together to show each other support and love. And also to poke around in your dead great aunt’s panty drawer or anywhere else you can think of searching for hooch.”

Sam’s note: The reason the video lasts 10 minutes is that he drinks the entire thing. I found myself oddly transfixed on the Ameritech logo on the poster in the background. Even though they merged with SBC more than a decade ago, being so prominently featured in this video STILL might constitute brand suicide.

“Steely Dan’s great song Do It Again outlines this pretty well. They give examples like compulsive gambling and attempting to rekindle failed relationships. But that was just the radio edit; the original version had a 4th verse that speaks about carrying armloads of liquor from your dead great aunt’s house, running home with it and drinking it. And then doing it again.”

Sam’s note: I’m afraid one day he’s going to be reelin’ in fewer years of his life because of this devotion to rapidly consuming horrific bottles of molasses-y champagne.

9 | Drank it from a stainless steel bowl. In the bathtub

“I do not intend or wish to live too long. To that end, I shaved at least a decade off my life by having a ‘friend’ ship me a 43-year-old bottle of white wine. (I considered putting that in quotes also, or at least just the word ‘white’). The cork broke apart upon contact. I strained most of it out; the rest is lodged in my liver. I considered turning the shower on with all my clothes on during the video just to up the ante. I’m such a pussy.”

Sam’s note: If there’s no other takeaway from this list, it’s that not all wine is better with age. (Also, around the 9:03 mark of this video he has an emotional moment about how his wine hobby has kept him single in his 30s. I’m not sure if that’s intentional symbolism about the concept of “aging well,” but if it is, Robert Frost would be proud.)

“There were so many gems: Lemon ice, quite similar to those ’80s air fresheners made out of that jelly-like substance that evaporated into the air… peaches and cream, like a tart and refreshing hard candy tainted with lightweight mineral spirits… and, of course, the many bottles of banana red. The doctors are sure the Red No. 5’s half life will come around in 2043 and most of the tremors and auditory hallucinations should subside by then.”

7 | Had a half-pint shipped in from my national contacts 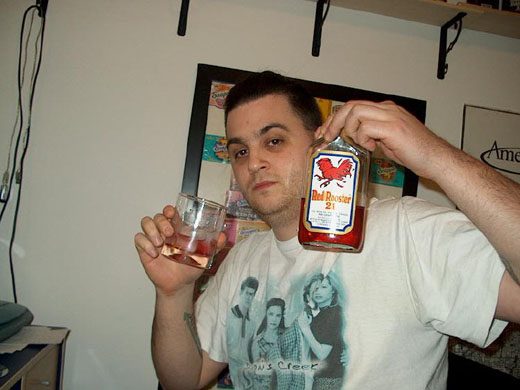 “Some people make a hobby of buying and selling things on eBay. There you have stamps, baseball cards… and, more commonly, web-stalking persons who claim to have access to new and exciting low-grade wines which are only marginally destructive to the human body.”

Sam’s note: Pacey does not approve of buying Red Rooster 21 wine over the Internet.

“Sometime back in 2005 I went to an art gallery that was showing some pieces by a friend. Sometime in 2012 I should start taking Valtrex. Scratch that. Make that 2005 as well.”

Sam’s note: I tried to do a CSI zoom on the photo and, as best as I could make out, the Old Navy homeless guy is holding an open bottle of Harp. Meaning HE brought the more expensive alcohol to this equation. 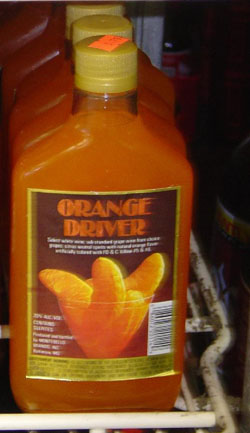 “As I kid I always loved those ‘orange slices’ candies. I never served them to myself from a martini glass as depicted on the label but I made up for that misstep by drinking this flask o’ fun. I followed that with a multitude of other beverages. I probably should have had a different flask o’ fun installed into my arm with a saline drip the next day.”

Sam’s note: I love the Orange Driver logo of weathered orange slices in a cheap wine glass. But just looking at that bottle makes my insulin get antsy. I feel like I’d have to cut this with about 17 parts soda to make it consumable.

“Thirteen percent is pretty much the standard for most ghetto wines, at least the flavored ones. Once upon a time there was an MD 20/20 with an added five percent but only for the Red Grape Wine flavor. It has long since reverted to the lower ABV. The only thing that trumps nostalgia for those days is to get your hands on a dusty old bottle and guzzle it. And the only thing that trumps that is not having the bottle shipped in, or at least not drinking it.”

Sam’s note: It’s surprisingly impressive to watch him drink the full bottle so quickly. Especially when it seems to knock him out almost immediately. I could not drink an entire bottle of this in less than a half hour. (Or, probably, less than half a year.) 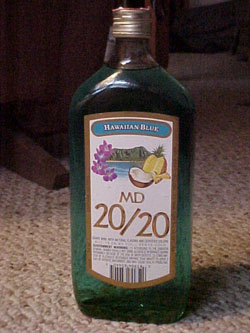 “With a bouquet of aquarium water and a finishing note of suntan lotion, you’re sure to be disappointed. And gag. This particular one was found in a local store far, far past its prime.”

Sam’s note: Everything about the Hawaiian Blue makes it look like aloe vera lotion for sunburns. Everything.

“Some guy liked my performance so much he actually edited out just those 3 minutes and reposted them. Apparently he shared it on Twitter as well. But what do I have to be ashamed of — besides my physique, my $4 aviator sunglasses and my asinine behavior? I am a proud, confident man!”

Sam’s note: The biggest surprise of this video is the music choice? Shouldn’t it be, like, Uncle Kracker based on every available context clue — not indie hip-hop and neo-soul?

1 | Posted pics of my wine on the Internet without watermarks 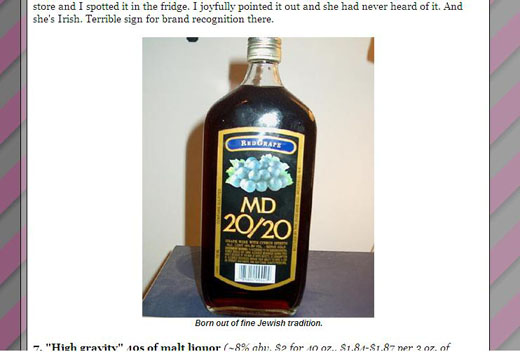 “Any enterprising young site administrator should have the wherewithal to add watermarks to their properties — or at least to have counsel on retainer to sue the hell out of anyone that dares pass your material off as their own. Below-average humor websites are notorious for recycling other people’s stuff but often have the decency to offer you a guest post as an out-of-court settlement. I’m still waiting on my t-shirt that says ’11points.com Stole My Pictures and All I Got was This Lousy Guest Post’.”

Sam’s note: All photos on this list were taken by me. There is no such thing as GhettoWine.com.

For more on this topic, visit the imaginary website GhettoWine.com.