Harvard Business Review heard ‘you should always have a picture with your tweets’ and ran with it in the weirdest way possible.

There’s a pretty big readership crossover between my audience on this website and the Harvard Business Review. I mean, it was an arms race between HBR and 11 Points over who would be the first to write things like 11 Things Calvin Has Never Peed On, But Should, The Most Important Leadership Competencies, According to Leaders Around the World and Which Wizard of Oz Character Do You Want to Have Sex With?

But just in case you’re not super familiar, Harvard Business Review is a magazine, primarily about business management, owned by Harvard University. It’s not necessarily the magazine offshoot of Harvard Business School, but they’re not not associated.

Unfortunately for HBR, that means sometimes they fall into business school traps, like a bit of confusion between a good business strategy in theory versus practice.

My friend Ryan is a big Harvard Business Review fan, and recently noticed something about their Twitter feed. “Every link to an article has a picture,” he told me, “but they’re hilarious, because they usually don’t have anything to do with the article. And they’re not normal clip art pictures either. They’re super weird.”

I checked out their Twitter feed, and he was right. And we formulated a pretty probable theory on what happened.

Here, then, are 11 examples of HBR tweets from this month featuring incongruous, absurd images. 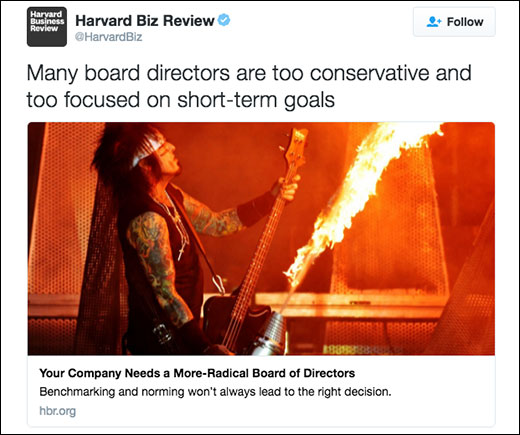 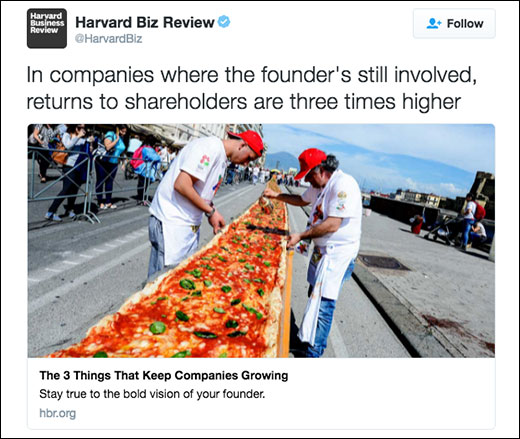 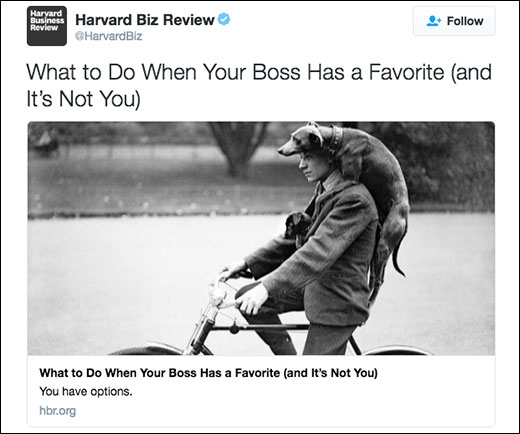 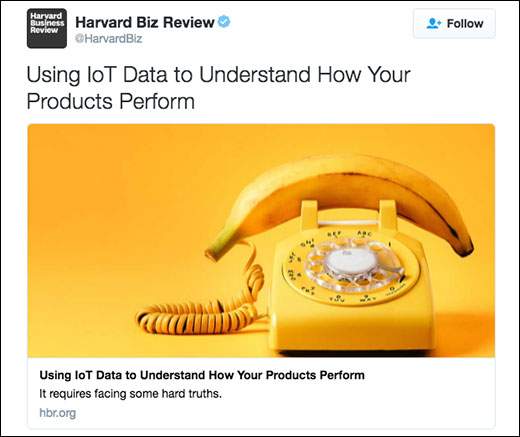 5 | Chest of toy viking helmets and weapons = understand your customers 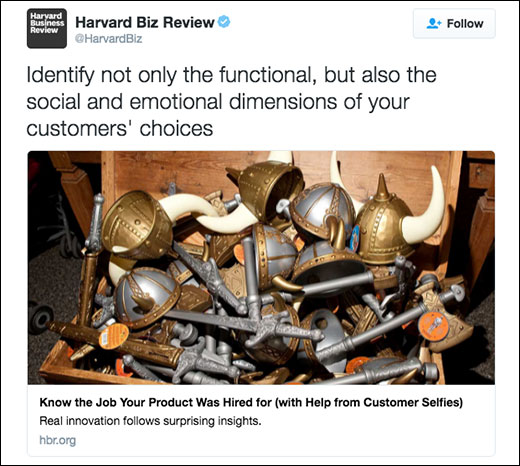 Because no one understood their customers like the Vikings. “What do you think the people in this village want?” “I dunno, probably to have us burn and pillage.””That’s what I was thinking they want too.” “Synergy buddies!” “Let’s do it.”

6 | Wet otter = understanding the stages of a quarter-life crisis 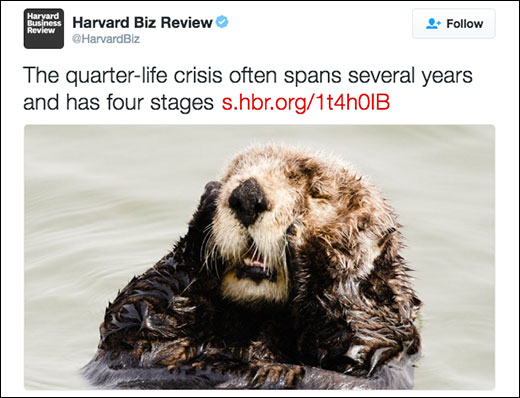 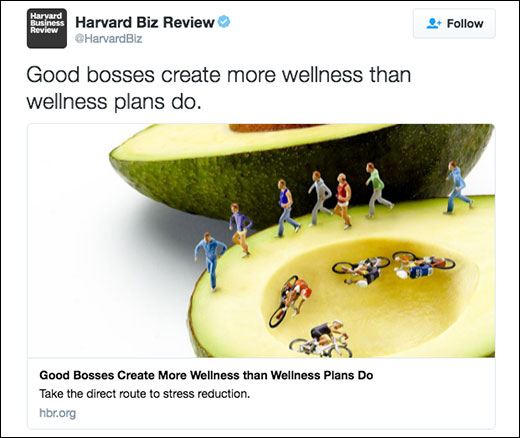 This is the only one where I might be able to see a connection, but I can’t get past the giant avocado. Also, the one response this tweet got was someone saying “You shouldn’t use an avocado to represent health, they’re high in fat,” which shows confusion is a two-way street with the HBR Twitter account. 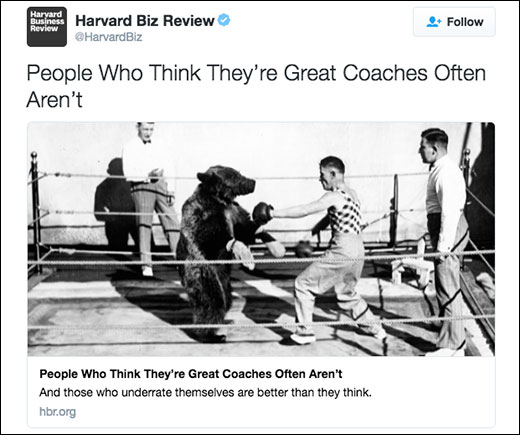 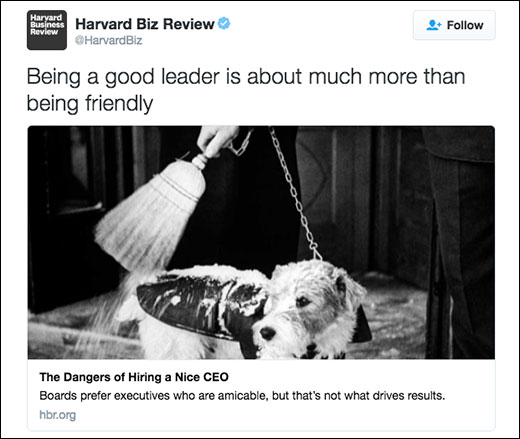 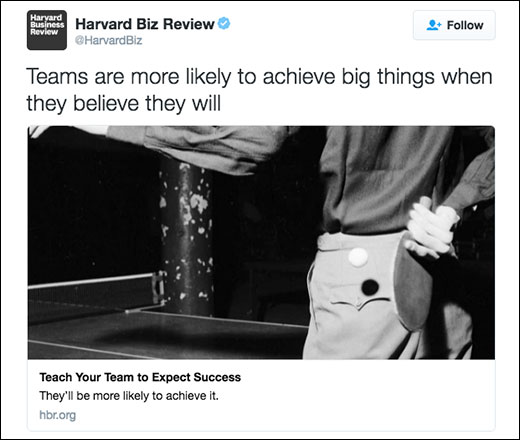 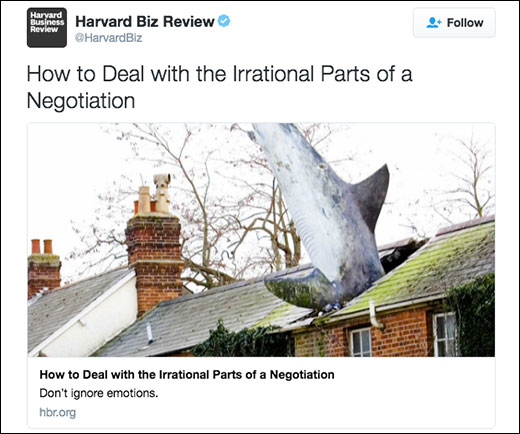 Did they Photoshop this themselves? Find it on a stock photos site? And who came up with the idea in either case? So many questions.

Again, those 11 are just from THIS MONTH. And this month is only 24 days old.

I would’ve scrolled back further, but it took me more than an hour just to get through this month’s tweets. That’s because HBR follows the “always use an image” social media marketing rule to a fault — but violates pretty every other elementary rule. Their Twitter is 100 percent self-promotional, only featuring their own content. They don’t engage anyone. They post the same links over and over and over and over and over. Their Twitter account is closer to spam than an RSS feed. But man, these images sure do make it a wild ride.

And, really, I’m in a tenuous position to criticize. They have 2.4 million followers, I have two percent of that total if you add up all of my accounts across all platforms. I use Twitter for a little engagement, but mostly just to post links to my writing. (And — gasp — I don’t always include a photo.) I understand the theory of social media marketing pretty well but focus all my effort on writing, not actually applying the principles. I’m in a glass house throwing stones.

So if I had to use a Harvard Business Review-style image to sum up my criticism here, it would be… 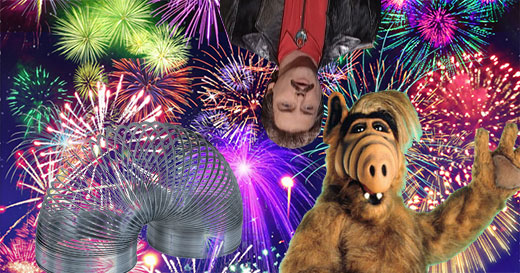 All 30 MLB Teams’ Official Hashtags, Ranked From Bad to Worse

11 Points Review of The Social Network